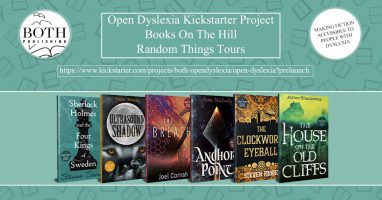 Books for adults with Dyslexia have been hard to come by. A group in the UK, Books On The Hill, is trying to do something to make a difference. Books On The Hill has created the Open Dyslexia Kickstarter Project. They are working with Both Publishers and many authors and writer groups.

I’m happy to be a part of the Random Things Tours in which many book bloggers can spread the word about this project. Dyslexia is a problem addressed with children in schools, but when they become adults finding books is harder. The Kickstarter Project should help to raise funds to get more accessible adult fiction books.

The Books We’re Sharing With You Are:

Sherlock Holmes and the Four Kings of Sweden by Steven Savile.

Summoned by the Swedish royalty,
the Great Detective must solve a
seemingly unsolvable riddle – how
can the king be in three places at
once? What devilry is it that has
thousands of eye witnesses placing
the monarch at cities a thousand
miles apart? Witchcraft? Sorcery?
Why? And how does this tie in to a
string of crimes that seem hound the
King’s footsteps?
The Author
Steven Savile is a bestselling British
fantasy, horror and thriller writer.
Steven was a runner-up for the
British Fantasy Award in 2000 and
again in 2010.
Marketing and USP
✦ Dyslexic friendly.
✦ Perfect quick read when traveling.
✦ To be featured trade Magazines
and will have active press coverage
from BBC Points West.
✦ Publisher himself is dyslexic.

The House on the Old Cliffs by Adrian Tchaikovsky

A collection of desperate
investigators are unleashed on a
mysterious disappearance, by a
lawyer working for clients who care
little about the quarry’s fate and
more for their own interests.
The Author
Adrian is an award wining British
fantasy and science fiction author. He
won the 2016: Arthur C. Clarke
Award for “Children of Time” and in
2017 won the British Fantasy Award
— Best fantasy novel for “The Tiger
and the Wolf”.

The Clockwork Eyeball by Steven Poore
In an alternate 1958 Marrakesh, the cold war continues with airships, clockwork cars and deadly spywasps. Young Saif risks his life to bring a defecting Russian agent out of the country.

The Author: Steven is the founder member of the Sheffield SF&F Writers’. His novel: Heir To The North, was shortlisted for Best Newcomer at the BFA in 2017. He has been a number anthologies with the BFS Award-winning publisher Fox Spirit Books.

These are some of the books in the project.

We are launching a Kickstarter beginning in April 2nd 2021 for 30 days, with the focus on paying for the printing of our books and giving us starting capital to continue to print more titles.
There will be many ways you can be involved in this. You can contribute on the Kickstarter website itself. There will be a number of different options of donating money, in which you will receive rewards, such as ebooks of a title or a paperback of one or more of the titles to be published. In addition a unique reward from authors who are contributing to the project.
You can still contribute outside the kickstarter. We are happy to receive your help in the shop, where we will have a donation box available.

One Reply to “Making Fiction Accessible to People With Dyslexia”