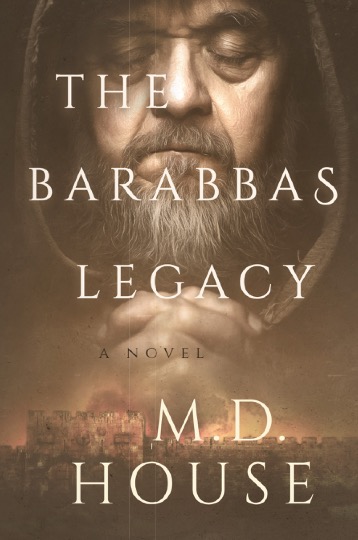 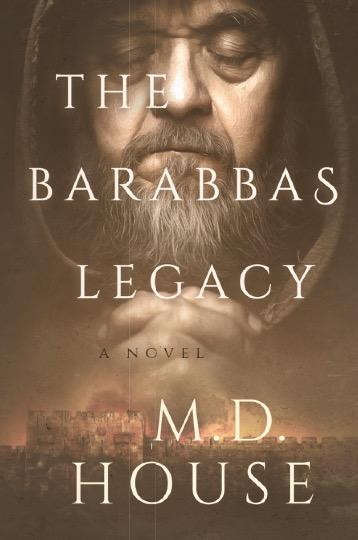 (April 2022) – Christians around the globe are preparing for the upcoming Lenten season and the celebration of Easter in a time that is frightening and uncertain for many. In many places Christianity itself is under attack, as is the right of people to freely worship. In this season of reflection and spiritual preparation, what better story to contemplate than the lives of the early church leaders, who spread Christ’s message at a time of great peril and persecution?

In The Barabbas Trilogy, M.D. House has imagined the life Barabbas went on to live after being spared his sentence of death in exchange for Jesus Christ. His journey has intertwined with those of many of the apostles, including Paul, Peter and Luke, as they sacrificed everything to spread the Gospel throughout the world.

Now, author House concludes the story of Barabbas’ life in the final chapter of the trilogy, The Barabbas Legacy, which follows Barabbas and his wife Chanah as they continue their evangelistic mission across the known world as cauldrons of political and military chaos boil across the Roman Empire.

About the novel, House says, “As I’ve journeyed with Barabbas, his family, the apostle Paul, and the centurion Cornelius, I remind myself that God loves each of his children equally, aiding them in the best ways possible in all ages of the earth. He sent his son to advocate for all of us, from our first earthly parents, Adam and Eve, to the very last baby born before the advent of Christ’s millennial reign. We may become discouraged amid hardship or persecution. The early saints struggled with it as well. But Christ is faithful, and there is nothing in our experiences or in our “modernity” that he doesn’t understand completely. Continued trust in him will be well-rewarded, both now and in the next life.”

After completing intensive historical research into the Roman Empire, House crafted a novel that works to give readers a sense of the world the early saints inhabited as they made their way through Rome and interacted with historical figures like Emperor Nero. As in the first two volumes, several notable historical figures and events are woven into Barabbas’ story, such as Nero, General Vespasian and his son Titus, and the final siege of Jerusalem.

M.D. HOUSE is the author of The Barabbas Legacy, as well as the first two volumes in The Barabbas Trilogy, I Was Called Barabbas and Pillars of Barabbas. He also authored the science-fiction novel, Patriot Star. Before beginning his second career as a writer, he worked for twenty-five years in the world of corporate finance, strategic planning, and business development. Now, Michael lives in Utah with his wife, where he spends his time writing and enjoying his children and grandchildren. Learn more about Michael and his work at www.mdhouselive.com.

From Chapter 3, the perspective of the apostle Paul

Paul stopped, raising his arms partway to calm Morech and Antonius, then waiting tranquilly for the men to skid to a halt a few yards in front of them.

“You’re here to rob us, I presume,” said Paul, taking the initiative.

The man in the middle, who seemed to be the leader, blinked, then snorted. “And maybe kill you, too. What’s to stop us?”

“God, who is Christ Jesus, who sends us along this path,” replied Paul serenely. He clasped his hands in front of him, standing comfortably. He had been robbed before, and beaten, and nearly killed. He knew what it felt like. But he experienced no fear of such in that moment.

“Ha ha!” yelled the man with exaggerated energy, looking at his companions. By all appearances, none of them had bathed in weeks. Fortunately, they were downwind. “He claims a god is going to protect him. This might be funner than we thought!” He laughed loudly, squeezing his eyes shut for emphasis as the other two joined in.

“For whom?” responded Paul, raising his voice slightly to be heard over the three guffawing ruffians. He could feel his own companions tensing beside him, especially Antonius, who constantly exhibited a boundless loyalty and love for Paul—and for Barabbas, given their first encounter on Melita, which had eventually led to his freedom. “Why did you leave your hiding place? You are only three, and we are three. You don’t even know if we are armed. And I might be smaller and older, but that doesn’t mean I’m not dangerous.” He said it matter-of-factly, as if he had just described the weather on a mild day.

“We’re experienced fighters,” said the leader boastfully, straightening to his full height and sticking out his chest, which was covered in a simple, hide-based armor.

“And I am a friend of Nero,” replied Paul, “though, admittedly, I am not in his best graces at the moment.”

“Ha! Then we’ll take your head and show it to him!” announced the leader.

Paul raised an eyebrow. “Even if you could take it, it wouldn’t survive the journey to Rome before becoming unrecognizable. Then he would have you hanged. Or crucified.”

That gave the man serious pause. “Then we’ll kidnap you, and take you to Rome alive,” he concluded. “I’m sure Nero will pay us a handsome fee.”

Paul chuckled, grateful he still felt so calm. “Have you met Nero?” He knew the humor in his eyes made the man uncomfortable. He would be recalling that Nero had a well-earned reputation for capriciousness and ruthlessness. Those stories were almost always exaggerated, lending them epic impact across the provinces.

“We’ll just kill you, then,” the leader sneered, “so you can’t never tell your ‘friend’ Nero you ever saw us. How about that?”

Paul’s calm grew deeper, and then his spiritual eyes were suddenly opened. “You have no idea what’s behind you, do you?”

“Aaaahhh haaahhh, you ain’t fooling us with that old trick. We’re smarter than your average, hard-working bandit folk.”

“Morech, Antonius, do you see them?”

He didn’t glance at his companions, but he sensed both shaking their heads. “No,” they said in unison.

Paul gazed briefly heavenward. “Father, open their eyes, that they may see.” He closed his own as a gentle breeze rustled his robes, then grew slightly in intensity. When he opened his eyes, Morech and Antonius had both fallen to their knees, staring at the area directly behind the bandits. Paul looked at each of his friends in turn.

“Well, I’ve had enough of this nonsense,” said the leader, raising his rusty dagger before him. He got into an attacking stance and was about to rush them when he pitched forward, landing awkwardly on his face. He leaped to his feet, whirling to face his companions.

“Which of you did that?” he asked angrily, following up his question with a creative curse and a shower of flying spittle.

Both men looked stunned, eyes wide, faces painted thick with outlaw innocence. “We didn’t do anything,” said one of them. “You just fell.”

The leader growled. He was so angry he didn’t seem to care that his back was to Paul and the others. “I didn’t ‘just fall,’ you moron. Somebody pushed me!” He stepped menacingly toward them. “Now which of you louts was it, and why?”

Shrugging, they both backed up a step in perfect unison. The leader wheeled toward Paul and pointed his quivering dagger. “Stay there while I get this sorted.”

It was such a ridiculous request Paul almost laughed. He grinned, grabbing each of his companions by the arm to urge them to their feet.