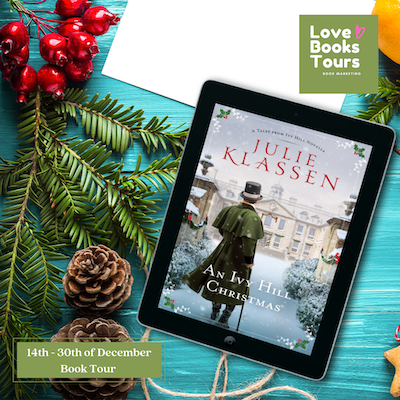 Richard Brockwell, the younger son of Ivy Hill’s most prominent family, hasn’t been home for Christmas in years. He prefers to live in the London townhouse, far away from Brockwell Court, the old family secret that haunts him, and the shadows of his past mistakes. But then his mother threatens to stop funding his carefree life–unless he comes home for Christmas. Out of options, he sets out for Ivy Hill, planning to be back on a coach bound for London and his unencumbered bachelor life as soon as the festivities are over.

December 1822
London
Walking past a linen draper’s, Richard Brockwell surveyed his reflection in the shop windows with approval. He cut a fine figure, although he said it himself. Inside, he glimpsed a pretty debutante he had been introduced to at some ball or other. She had flirted with him, and they had danced once, but he had not asked her again nor called on her afterward. Nor did he stop to renew their acquaintance now. She was too young and too . . . eligible.
He walked on. A stern-looking older woman stood outside the humble chapel on the corner. In hopes of avoiding her, he crossed the cobbled street.
Too late. Her voice gripped his neck like a mother cat grasping the scruff of her wayward offspring.
“You, sir! Will you make a donation to our most worthy charity?”
Dodging a passing hackney coach, she strode across the street to accost him.
Richard turned and pasted on a smile. His upbringing, while not without its faults, had taught him to feign politeness with ease.
Reaching him, she went on with her appeal, “I am Miss Arbuthnot, directress of the St. George Orphan Refuge. We rescue orphans from the retreats of villainy and teach them skills like printing, bookbinding, and twine spinning to enable them to obtain an honest living.” She held out a basket. “Our institution is supported by voluntary contributions.”
Voluntary or coerced? Richard wondered. He warmly replied, “My dear madam, how I look forward to you or one of your comrades addressing me almost every time I pass this way. Your . . . stamina is breathtaking. You rival an athlete in a Greek pentathlon.”
Her eyes narrowed, but he persisted with his most charming smile. “I applaud your philanthropic spirit. Truly. And like you, I give all I can spare to my charity of choice. My favorite coffeehouse and bookshop have first claim on my heart—and my purse.”
With a pert bow, he turned and walked on, leaving her sputtering and him quite satisfied with himself.
Richard was, he knew, a selfish creature. A person could not change his nature, his very heart, could he? He thought not.
Reaching the coffeehouse, he tipped his hat to the beggar outside and entered the beloved establishment, the aromas of coffee, pipe tobacco, newsprint, and books rushing up to greet him. Seeing his bespectacled editor bent over a newspaper at their usual table, Richard walked over to join him.
“Murray. Good to see you, old boy.”
David Murray raised his dark curly head and stood to shake Richard’s hand. “How are you, Brockwell?”