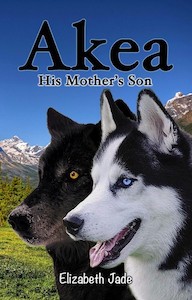 Akea – His Mother’s Son
Akea is no ordinary husky and taking her place as Wolf Queen was just the first step in the journey set out for her by the Great Wolf. Akea’s world turns upside down when humans raid their home, scattering the pack and capturing her hybrid son. Salvador struggles to adjust to a life in captivity quickly realising not everyone approves of his mother’s rise to Wolf Queen. When the Great Wolf sends him warning dreams, Salvador discovers his true purpose for being there.
“Ms Jade perfectly captures the atmosphere of life as part of the wolfpack and its many challenges. Her stories remind me of Jack London’s Call of the Wild, and with ‘His Mother’s Son’ she proves she not only has a knack for creating realistic and powerful characters, but a talent for describing the wild settings they inhabit with a natural confidence that is quite charming.” Colin Garrow (author)
Purchase Links
Amazon UK – https://amzn.to/2rOipYk
Amazon US – https://amzn.to/2Rm43sO

Author Bio
Elizabeth Jade was born in 1998 in Northallerton, North Yorkshire, England, but moved with her family to Wellington in Somerset when she was very young. Her early schooling did not go smoothly, and as a result, she was home-schooled from the age of seven. Her parents soon learned she had a unique slant on life and quickly abandoned attempts to follow the national curriculum in favour of child-led learning.
Elizabeth stumbled into writing at the age of fourteen when she began to suffer from anxiety and depression and quickly found her story ideas pouring out faster than she could get them onto paper. It wasn’t until the age of eighteen that she realised her struggles in school had been due to Aspergers Syndrome (an autistic spectrum disorder).
As an enthusiastic animal lover, Elizabeth volunteered first at the Conquest Riding Centre for the Disabled and then at St Giles Animal Rescue before moving on to the Cats Protection Homing and Information Centre. Her gifted way with the cats quickly earned her the title of ‘Cat Whisperer’ from the staff. Since she had always possessed such a way with animals, it was only natural for her story ideas to revolve around them.
Elizabeth’s personal experience as a young author with the challenges of autism, depression and anxiety, along with her writing theme of acceptance and overcoming obstacles, have led to her having a junior school class named after her.

2020 has been the year when many struggled with their mental health for the first time, and those who have been fighting the Black Dog for years found they hit a new all time low. This was certainly true for me. I’ve struggled since I was fourteen, although it’s not clear how much of this is due to having Aspergers (an autistic spectrum disorder) and how much was caused by going through school undiagnosed. Even after publishing my second children’s book in 2019, I was still convinced I would never achieve anything with my life or my books, and lockdown suffocated my writing mojo completely. So, I’m sure you can imagine my surprise when, back in July, I received an email from a school teacher which showed I had achieved something by just being myself.
Most schools like to have a theme when choosing the class names for the new school year. For 2020, Oldfield Park Junior School in Bath were naming their classes after authors and were asking permission to name one after me. ‘What!!!!!!!!!!’ was the first word out of my mouth, and needless to say, the exclamation marks don’t do the octave jump justice. According to Ms Fox, I was chosen because I hadn’t let my autism, depression or anxiety prevent me from publishing two books by the time I was 22. They felt my example would be a source of inspiration to the class, particularly as there will be several children with autism in the class and one with severe hearing loss.
While my own experience of junior school had been extremely unpleasant, I was encouraged to know that the children at Oldfield Park would be getting the support and understanding they needed. Sometimes that’s all any of us needs. I would never have got where I am today without help from my parents. And now, I had the opportunity to encourage the pupils in Elizabeth Jade class to actively look for what makes each of them unique, accept and celebrate these differences, and then look for ways to support and encourage one another in facing life’s obstacles.
In addition to getting to know me a bit better, the class would also be reading my books, as they teach the importance of acceptance and overcoming obstacles. These were not themes I consciously included, but may well have been woven in subconsciously by both my desire to be accepted and the obstacles I had faced in my own life.
In ‘Akea – The Power of Destiny’, Akea always felt different, even though she didn’t know why, and when she sees a lone wolf by the name of Kazakh, she understands that her true destiny lies beyond the relative safety of her sled dog family. Kazakh’s role is to help her discover her place in the world, but doing so goes against the rules and norms of wolf society. Each obstacle that Akea overcomes makes her stronger and brings her closer to her goal, until she finally ends up fitting in where she physically stands out the most, and is accepted by both the wolves and the family she left behind.
In ‘Akea – His Mother’s Son’, Akea’s wolf-dog son, Salvador, is captured by humans and taken to a wildlife park where he is shunned as a ‘mongrel’ by the first wolf he meets there. On learning of a threat to his family, he must convince her and the other wolves to accept his leadership, escape with him, and return in time to save his pack. So essentially, you have the same issues of acceptance and overcoming obstacles, but with an added twist.
For me, having Aspergers and mental health issues has made life a real challenge, but getting the support I needed has helped. I hope the same will be true not just for those in Elizabeth Jade class, but also for everyone affected by the events of this year. And maybe as we move beyond the crazy year that 2020 has been, we will see more people reaching out to support others whatever their differences or challenges may be.