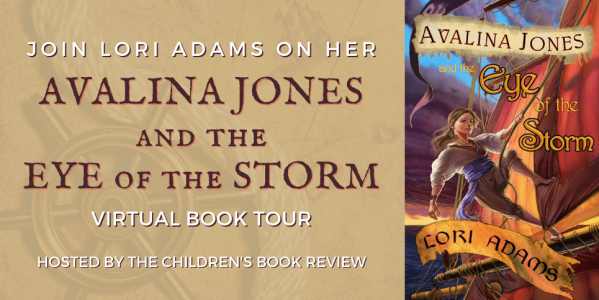 This post is in partnership with The Children’s Book Review and Lori Adams.

Avalina Jones and the Eye of the Storm

Publisher’s Synopsis: When a young girl learns she is the Last Heir of the legendary pirate Davy Jones, she is whisked away to begin life aboard an enchanted schoolship for Pirate Heirs where danger and excitement awaits.

Contemporary kids who happen to be Heirs of the most villainous and celebrated pirates in history. Superstitions, mysteries, curses, secrets, strange ocean creatures, undead pirates, and seafaring legends will thrill middle-grade readers in this rollicking, globe-trotting adventure.

Avalina Jones, the Last Heir of the infamous pirate Davy Jones, has never heard of Sea Magic, flying dinghies, Pirate Heir schoolships, phantom islands, undead pirates, or creatures called Half Ones. And she has never understood her strange connection to water. But when a beautiful woman arrives in a swirling waterspout, Avalina’s life explodes with more adventures than she can possibly imagine. She takes her rightful place aboard a giant Pirate Heir schoolship teeming with Heirs of the world’s most nefarious pirates.

Raised as a Landlubber, Avalina quickly realizes bizarre and danger are normal aboard Pirate Heir schoolships-food fights back, school supplies giggle or explode in your face. And not everyone can be trusted.

When Avalina is accused of a terrible crime, she must prove her innocence or risk being banished from the schoolship forever-and this in the middle of a crucial Treasure Hunt!

Avalina races to unlock the secrets of the ship, and makes a dangerous discovery that threatens everyone aboard. With the help of her new friends Charlie, Pippa, and Bummy, Avalina draws closer to the truth, unaware that a deeper, darker fate awaits.

Author Lori Adams expertly delivers a story that is timeless, bringing together elements of sea lore, magic, and adventure. The first book in a seven-book series, Avalina Jones and the Eye of the Storm, is a romping tale for middle graders who are searching for the next enduring fantasy classic.

LORI ADAMS is the author of the Avalina Jones series for middle-grade readers (Avalina Jones and the Eye of the Storm (#1) as well as two young adult series: The Kate March Mysteries: Speak Easy (#1) set in Hollywood during the Roaring Twenties, and the Soulkeepers Series: Forbidden, Awaken, and Unforgiven, a paranormal fantasy set in the quintessential but fictitious town of Haven Hurst, Connecticut and first published through Random House.

Lori was born and raised in Oklahoma but moved to Southern California where she lives with her family. She loves traipsing along SoCal’s wonderful beaches, watching Angel’s baseball, Cowboys’ football. Aside from writing, Lori loves reading and watching Classic Hollywood Movies.

How to add more Fan to the Fantasy mix

Children’s fantasy books are like chocolate chips in a cookie; you can’t have too many! Which makes it a highly competitive genre to write for. So why do it? Maybe because the best fantasy book hasn’t been written yet. Just as the best song hasn’t been sung, the best movie hasn’t been filmed, and the best cookie hasn’t been eaten. There is always room for the next adventurous author to try to add new fans to the fantasy mix.

The first book I ever attempted to write was a historical fiction for middle-grade readers. It was set in medieval England, and I was determined to make it as authentic as possible. I love history and research, so I basically had a ball, often getting sidetracked within the pages of the past. It was a great first book to learn from. But when I switched to fantasy, I was surprised by the sudden weight lifted from my shoulders. It was freeing and a bit exhilarating. I felt as though I had been let loose from a straitjacket made of cold hard facts.

That feeling lasted only a few days as I realized fantasy had its own restraints (and required just as much research). Luckily, I was in charge of those restraints because they lived within the world I had created. For the first book of the AVALINA JONES series (in which Avalina discovers she is the last heir of the notorious pirate, Davy Jones) I took great care to build a world that hadn’t been seen before. One with children who were heirs to some of the most nefarious, sea faring scoundrels in history—all living aboard a giant schoolship. And not just any old schoolship but one that was a ghost herself.

Building an authentic world for fantasy readers can be fun but tricky. Like I said, there’s lots of research required if you want it done right. But it’s best not to get carried away by adding too many ingredients of heavy descriptions that might thicken and slow the story. The story is always the most important ingredient. It’s a careful blend of fantastical elements and familiar reality that intrigues fantasy readers (young and old) and asks them to imagine themselves living in the world you’ve created. Once the rules or restraints are set, the new world needs to be populated.

If you’ve ever been on a cruise ship you might have seen a wide range of guests from every country and culture. It’s no different onboard a Pirate Heir schoolship. Heirs from all over the world live on the four schoolships in the AVALINA JONES series. It was great fun populating the schoolships with diverse characters, customs, and languages. I also broadened the ingredients’ list and added some rather bizarre creatures.

Writing fresh fantasy for children requires an imagination beyond the norm. Fairies, vampires, witches, unicorns, mythical creatures, and the like are out there aplenty. And loads of fun to read. But I pushed my imagination beyond fur, fae, and fangs and created Half-One creatures (half human, half sea creature). Stereotypical creatures won’t do, and neither will conventional characters.

I think most readers, especially young readers, want to identify to a certain extent with characters in the story. Avalina Jones is a complex ten-year-old who was left at an orphanage at the tender age of four. She’s learned to be resourceful, but longs to fit in and please others. Which is all well and good, but this is a fantasy story. Avalina discovers she has a strange connection to water, and it’s this supernatural ‘gift’ that intertwines with her human traits and leads to trouble aboard the schoolship.

Avalina has the habit of leaping before looking. She faces her fears with commendable courage but her plans often go sideways. When the captain of the schoolship, Cap’n Killigrew, rescues her from certain disaster, he demands to know,

“Ye won’t never do nothing like that again, aye?”

Avalina, who strives to be as honest as possible, replies, “Gosh, I dunno. I never know what’s gonna happen next.”

I image lots of kids might want to give that answer. I certainly do. So, while Avalina’s character has several complex layers, the main storyline is short, simple, and easy for young readers to follow.

Avalina is accused of a terrible crime and must prove her innocence or risk begin banished from the schoolship forever.

Even in fantasy, especially aboard a schoolship, there are life lessons to learn: self-confidence, responsibility, communication, learning through discovery, etc. Mixing reality into the fantastical world of Pirate Heirs invites readers to experience important emotions such as empathy or compassion. Avalina’s deckmates join together to help her overturn the ‘Somewhat Guilty’ verdict, showing the value of teamwork, courage, and keeping your word. Such elements help readers stay emotionally connected while reading, even as the overall fantasy storyline swirls around them like black fog—the undead pirate, Del Maligno, has vowed to destroy all heirs of Davy Jones.

The looming mystery and fear of Del Maligno finding Avalina Jones flows through each book of the seven-book series. Readers who climb aboard and take the journey with Avalina will search for answers like a treasure hunt: Will Avalina Jones grow to be a true Pirate Heir? Will she learn to develop her unique gifts and discover their purpose? What role will her deckmates play in helping her? Will she defeat the evil Del Maligno, saving herself and her fellow Pirate Heirs?

Having the freedom to go beyond the limits of your imagination is one of the joys of writing fantasy for children. Lots of chocolate chips in the cookie, but what a great flavor fantasy adds to a child’s reading experience. I hope anyone who reads AVALINA JONES AND THE EYE OF THE STORM will count themselves a Fan of Fantasy.

Enter for a chance to win an Avalina Jones and the Eye of the Storm prize pack!

An autographed copy of Avalina Jones: And the Eye of the Storm

A Hands-Off Me Gigglin’ Grog mug

An autographed copy of Avalina Jones: And the Eye of the Storm

If you love Book Tours, Book Reviews, and Giveaways, you’ll want to subscribe to the Lisa’s Reading Newsletter. Sign up form is on the sidebar.