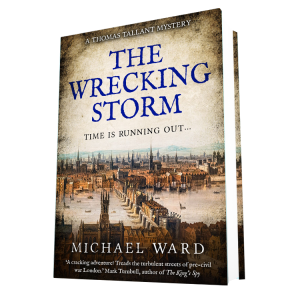 Writing has been central to Mike Ward’s professional life. On graduating from university he became a journalist, working in newspapers and for the BBC. He then went into journalism education, teaching and researching journalism practice before becoming head of the UK’s prestigious Journalism School at UCLan. For the last eight years he has run his own content creation company.

‘Rags of Time’ is Mike’s debut novel. Its sequel is due to be published late in 2020.

A chill wind blew upriver as the dawn struggled into life. London was waking to a dank, grey day, the overnight rain still pulsing fitfully, peppering the water’s surface.

A wherry edged from its landing stage on the northern bank of the Thames. As the boat cleared the dock, small waves slapped against its side, making the lantern in its prow bob up and down, a solitary movement on the black, silent expanse of water.

Francis Cavendish shuddered and gathered his thin cloak around his shoulders.

Sitting at the back of the wherry, he was chilled to the marrow, but didn’t care. He had finally escaped from the suffocating hole in the wall that had been his hiding place for three weeks.

He studied the broad-shouldered man on his right sharing his seat. Francis did not know his name, where he came from or who he was. And yet he was trusting this swarthy stranger with his life.

Instead of fear, he experienced an intense elation. Two days ago he was within inches of discovery, certain torture and a bloody death, only to escape! In that moment, he knew the Lord still had work for him.

His throat tightened and nausea returned at the memory of that priest hole – the shouts on the stairwell, the tramp of boots and then hammering on the wall outside his hiding place. Voices yelling, wood splintering, excited shouts of discovery turning to curses and oaths, and then silence. Francis, a cloth rammed into his mouth to stifle the sobs of panic convulsing his body, straining his every fibre to be still, and all the time the murmur of voices inches from him, disappointed, bitter. And, finally, the desultory clatter as his armed pursuers walked away, disappointed. He had escaped discovery by the thickness of an oak panel. His ‘hide within a hide’ had deceived his pursuers as intended. It was a miracle.

Francis was transferred that night to an old warehouse by the river, and there he remained until his rescuers arrived in the early hours of this morning. Now he was afloat, heading to safety.

A ragged cormorant emerged from the gloom and scudded past the wherry in full flight, only feet above the water’s surface. The man on his right yawned and coughed. Silence had been critical when they left the warehouse but now they were approaching mid-river. The man stretched and nodded towards the priest’s head, looking quizzically. ‘Why have you kept it?’

Francis touched his shock of red hair and grimaced. ‘I usually dye it black but I had to leave my last refuge in something of a hurry.’

‘Mmm, that’s a pity. You don’t want to stand out and be remembered.’

Francis nodded. He studied the man’s face in the improving light. His leathery skin was ravaged by smallpox scars, his lank, straw-coloured hair tucked behind his ears, revealing piercing blue eyes.

The stranger had arrived at the old warehouse with two others. Francis had been wary but, despite his fierce appearance, the man was calm and respectful. He provided much needed food and drink and joined him in prayers before eating. Francis noted the stranger’s care in avoiding discovery as they left the warehouse, and his conviction grew that he was in safe hands.

If you love Book Tours, Book Reviews, or Giveaways, you’ll want to subscribe to the Lisa’s Reading Newsletter.

One Reply to “The Wrecking Storm”