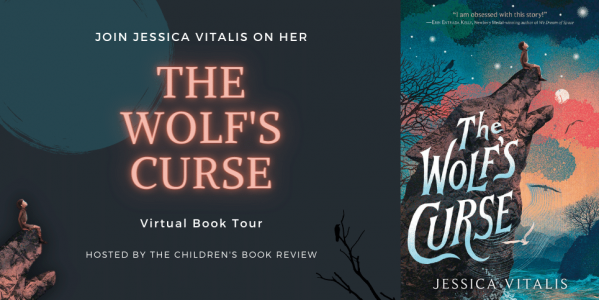 Publisher’s Synopsis: Twelve-year-old Gauge’s life has been cursed since the day he witnessed an invisible Great White Wolf steal his grandpapá’s soul, preventing it from reaching the Sea-in-the-Sky and sailing into eternity. When the superstitious residents of Bouge-by-the-Sea accuse the boy of crying wolf, he joins forces with another orphan to prove his innocence. They navigate their shared grief in a journey that ultimately reveals life-changing truths about the wolf—and death. Narrated in a voice reminiscent of The Book Thief, this fast-paced adventure is perfect for fans of fantasy such as The Girl Who Drank the Moon and A Wish in the Dark.

Jessica Vitalis is a full-time writer with a previous career in business and an MBA from Columbia Business School. An American ex-pat, she now lives in Canada with her husband and two daughters.

This tale of a twelve year old boy is a dark tale about death and the afterlife. Gauge is protected by his grandpapa because he is a voyant and the superstitious townsfolk are afraid of him. He can see an invisible wolf, who is believed to be a stealer of souls. The beliefs of this village include the wolf killing those when the voyant calls him.

The grandpapa knows that he must protect Gauge from the corrupt mayor who rules the town and enriches himself with the taxes of the poor people. Gauge’s grandpapa is near death and eventually dies. When this happens, the mayor goes on the hunt to capture Gauge and set him on a raft at sea. This is a death sentence.

The blacksmith and his daughter take Gauge in to their home to hide him. They now are putting their life at risk, because they will suffer the same fate if caught. Gauge and the Roux are sneaking around trying to be careful, but Gauge is caught. The wolf begins to appear to him more and more. When Gauge and Roux are thrown into the guarded room before their death sentence, the wolf appears and offers them a way out.

The wolf wants Gauge to take his place as the keeper of souls so that the wolf can go to the afterlife and be with her daughter who died before her. The book goes into detail of how the wolf takes the soul of the dead person out of their feet and carries it in his teeth to the afterlife. Gauge says no to the wolf. They are terrified and want to escape, but there is no good plan. You’ll have to read the rest of the book to find out what becomes of these two.

The darkness of the topic is hard for young children (8+ years) and makes it seem like the afterlife can be whatever you want it to be. There are many good examples of good character in the book. Gauge and Roux are kind and honest children and have good parents/grandparents. I don’t like the example to children that they should question beliefs about what happens when they die. Parents will want to be aware of the questions that could come up in their children’s thoughts if they read this book.

Enter for a chance to win a hardcover copy of The Wolf’s Curse!

A hardcover copy of The Wolf’s Curse