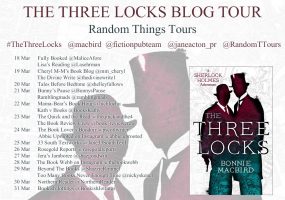 The Three Locks – a gripping new Sherlock Holmes adventure by Bonnie MacBird – is published by Collins Crime Club, an imprint of HarperCollins, on 18 March 2021. It is the fourth in her acclaimed series.
The year is 1887 and an Indian Summer broils London and Cambridge. A mysterious impregnable box arrives for Watson, locked and with a secret from his past. Then a famous escape artist/conjurer fails to unlock his “cauldron” and burns to a crisp during a performance at Wilton’s Music Hall. And in Cambridge, three suitors including a priest, an aristocrat and a young physicist vie for the love of a spiteful beauty, who vanishes after her lookalike doll is found dismembered in the Jesus Lock on the River Cam. The cases convolve as Holmes and Watson tangle with clergy, police, academics and scheming siblings, risking life and limb to solve the murders and to keep the innocent from the gallows.
MacBird’s stylish updates to Conan Doyle’s canon bring all the wit, camaraderie and deductions one expects from Holmes and Watson, but with the extended arc of a novel allowing not only more character development but also action, which carries them far beyond the locked room mystery and into danger.
Each of MacBird’s four Holmes books explores a theme. Just as Art in the Blood revealed the perils and gifts of the artistic temperament, Unquiet Spirits uncovered the danger of letting ghosts of the past lie unresolved, and The Devil’s Due touched upon the cost of corruption, The Three Locks examines the risk of keeping dark secrets locked away.
Meticulous research and attention to period detail enrich the reading experience. The Three Locks is a must-read for fans of the original Sherlock Holmes adventures and for readers new to the genre.
For review copies, interview requests, jacket images and author photographs
contact: Jane Acton
jane@janeactonpr.co.uk / T: 07971 661576

Bonnie MacBird was born and raised in San Francisco and fell in love with Sherlock Holmes by reading the canon at age ten. She now lives in London and Lost Angeles. Her long Hollywood career includes feature film development at Universal, the original screenplay for the movie TRON, three Emmy Awards for documentary writing and producing, numerous produced plays and musicals, and theatre credits as an actor and director. In addition to her work in entertainment, Bonnie teaches writing at UCLA Extension, as well as being an accomplished watercolourist.

She is active in the Sherlockian community in both the UK and the US, and lectures regularly on Sherlock Holmes, writing, and creativity.

Bonnie’s previous three Sherlock Holmes adventures are: Art in the Blood; Unquiet Spirits and The Devil’s Due. Her books are now available in 17 languages worldwide.

Advance praise for The Three Locks

“The parade of Sherlockian pastiches testifies to the potent and lasting genius of Conan Doyle’s creation. Yet few such homages offer the twenty-first-century reader Victorian atmosphere and drama like Bonnie MacBird’s. The rivalry and frustrations that colour the partnership of Holmes and Watson, their James Bond adventures and escapes, the great man’s ego and eccentricities, Watson’s catty wit—all are here, in the vivid atmosphere of an unusually hot London summer. MacBird’s sly plot and admirable sense of pacing keeps the story twisting and turning in a way that would have kept Doyle himself turning pages.”

“Bonnie MacBird’s The Three Locks satisfies a hunger for more adventures of Holmes and Watson on so many levels: Not only does she perfectly capture their voices, she captures that most critical element—their humanity. Brava!”

“Bonnie MacBird has conjured up a captivating three-card monte of murder, mystery and magic. The Three Locks may be her best yet.”
Dan Stashower, Edgar, Agatha, and Anthony award-winning author of Teller of Tales: The Life of Arthur Conan Doyle

“Though stage magic features in The Three Locks, the real magician is author Bonnie MacBird, who once again brings humour, action, rigorous period detail, and the characters we love to her latest Holmes adventure.”
Dennis Palumbo, author of the Daniel Rinaldi series, Writing from the Inside Out

‘One of the best Sherlock Holmes novels of recent memory, at least as entertaining as Anthony Horowitz’s The House of Silk … MacBird’s artistry will keep readers eagerly turning the pages just to see how she orchestrates the big reveal.’
Michael Dirda, The Washington Post

‘MacBird’s outstanding sequel to 2015’s Art in the Blood melds a twisty, multi-layered plot with a plausible exploration of Sherlock Holmes’s life before Watson…Will make Sherlockians eager for more from her.’
Publishers Weekly Starred Review

‘MacBird could possibly be Conan Doyle reincarnated. I hope this is a lengthy series. A perfect read as the nights draw in.’
CrimeSquad.com

‘A pacy and twisting story – made me forget I wasn’t reading a Sir Arthur original.’
The Sun

‘A stylish leap…plunges with brio into 19th-century Europe.’
The Independent

‘A thoroughly entertaining Sherlock Holmes adventure worthy of Doyle himself… vivid period detail, a superb, labyrinthine plot, snappy pacing and, most importantly, a deep respect for the classic characters.’
Bryan Cogman, Co-Producer/Writer, HBO’s Game of Thrones, and co-author of Inside HBO’s Game of Thrones

It was late September of 1887, and an unusually hot Indian Summer. For two weeks London had suffocated with furnace-like temperatures, keeping me indoors for days. The blinding heat on Baker Street rose from the pavement in

shimmering waves, the stench of refuse and horse droppings adding to the misery. Only the hordes of raucous city- dwellers, whom I knew were flocking to the seaside with their dripping ice creams and shouting children, prevented me from fleeing to Brighton or Cornwall with them.

My name is Dr John Watson, and at age thirty-five I was six years into sharing both rooms and many adventures with my friend, the remarkable consulting detective, Mr Sherlock Holmes.

But sadly, Holmes seemed to have forsaken my company of late. I had seen little of him for three weeks. I longed for a distraction from the misery of this weather. Not only had he not invited me on his recent escapades, but he had dismissed my questions with a petulant wave of his hand.

When Holmes did not wish to reveal something, no cajoling, guesswork or sleuthing could prise it free. He likewise kept his personal history, which I always suspected to be tinged with the dramatic, locked away as securely as any treasure stored in a bank vault. But even I have a few secrets of my own.

Locks, after all, are in place for a reason – whether privacy, security . . . or safety.

It happened that a locked and deadly secret played a key role in each of the two cases – and a puzzle of my own – which presented themselves to us that fateful month. So complex were these gruesome mysteries, and so tragic the outcomes, that it took the genius, bravery and resourceful- ness of Sherlock Holmes to solve them, and a certain transparency of my own to tell of them now. My hesitation in doing so earlier will become apparent, perhaps only at the very last.

Our rooms faced east on Baker Street, and on that day I had closed the heavy curtains against the morning sun, leaving the windows behind them cracked open and myself sitting in half light, too hot even to read. Despite my claim that I had become inured to the heat during my army years in India and Afghanistan, I suffered mightily.

I contemplated asking Mrs Hudson for an iced lemonade, but the poor woman was no doubt prostrate on her bed

from the heat. A paper fan lay next to me, useless in this oven. My ruminations were interrupted when the postman arrived with a small rectangular package, addressed to me and postmarked Edinburgh.

I welcomed the distraction.

The package was perhaps half the size of a shoebox, and heavy. The sender was a mystery, one ‘E. Carnachan’. I unwrapped it, only to find a smaller box inside covered by another layer of brown paper wrapping, this one stained, faded and tied with string. A note had been slipped under the string.

I removed and unfolded it, my hands sticky with sweat. The handwriting was old-fashioned and feminine, shaky, perhaps with age or illness. I read:

Dr John Watson—
You do not know me, but I am Elspeth Carnachan,

a name you may not recognise. Carnachan is my married name, but I was born a Watson and your father’s half-sister. Your father and I parted ways while still in our youth, and I was effectively erased from the family history before you were born. It is doubtful that he ever mentioned me to you.

Your mother, bless her kindly soul, maintained contact despite your father’s ill opinion of me. You can confirm my familial connections if you so choose by public records in Edinburgh.

I am an old woman now and consumption will soon take me. In clearing my affairs, I came upon something in my attic last week that was meant for you. It is enclosed.

When you were only eleven your mother gave it to me for safekeeping with the direction to give it to you on your twenty-first birthday. She was in perfect health when she entrusted it to me, and so I wondered why.

By a strange twist of fate, she died only two days later. Perhaps she was prescient? We shall never know. I placed it in my attic, intending to deliver it at the designated time. But life intervened and it slipped my

mind.
I will now make a shameful admission. Upon redis-

covering this last month, dear nephew, I was feverish with the thought that I might have caused some disaster by my careless delay in sending it to you. To quiet my mind, I tried to open your gift, even going to the extent of having several of Edinburgh’s finest locksmiths apply their skills, to no effect.

I hope you will forgive me. I think your mother would have done so. Please receive this in her spirit – she was the soul of kindness and generosity – and not with the judgemental anger so characteristic of your father.

2 Replies to “The Three Locks”