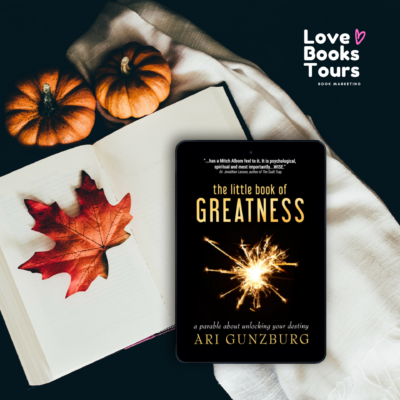 The Little Book of Greatness by Ari Gunzburg

The Little Book Of Greatness is the story of a man who is overwhelmed. This

man, David, goes to a scene from his youth to contemplate life. While there he meets an older man who sends him on a quest for answers. Join David as he learns about the 5 Keys To Greatness while facing his own mortality. As David meets each keyholder, he learns another part of the system that lasts a lifetime. The simple, easy-to-remember system that will help you unlock your destiny, achieve your dreams, and live your best life.

Ari Gunzburg is a rising new star in personal growth. As an award-winning international speaker, Ari motivates audiences using personal stories filled with triumph and travail, tragedy and transformation. Ari now brings this energy to his debut non-fiction story about achieving the greatness within.

Disclosure: A book was received in order to review. All opinions are 100% my own.

Unlike many self-help books I’ve read, there wasn’t an index of topics followed by small lectures. This self-improvement book instead was written as a parable.

The story follows a man named David who was going through a mental crisis. He was discouraged with his life. His life wasn’t going the way he wanted and he didn’t know where to turn. He hiked up to some cliffs that overlooked the highway to think about things.

An older man showed up who was patiently trying to get through to him. After a while he convinced David to try something different. He introduced him to the concept of the 5 Keys to Greatness. This mysterious-sounding acronym stood for 5 words: Give, Reason, Engage, Amazing, and Tenacity.

To learn how to find these 5 keys, the older man sent him to a person who was to teach David. He went to meet Regina the next day. After she began to teach him about the first key, he took a cab home. But, on the way he was injured in a car crash.

While in the hospital, scans showed something on the images that looked very dangerous. The doctor promised to do further scans soon. David was very concerned, but continued on to see another person who would teach him the next key.

Reason (or purpose) was the second key and he went to meet Ezra to learn from him. Ezra spent time teaching him about life purpose. He asked David what he wanted to do and what did he want his legacy to be. David was very excited about learning these first two keys.

David continued to learn about living in the moment with Celia, who taught him about Engage or Presence. She spent time with him, showing him how to focus and how it was important to fight the urge to be distracted.

Amazing was taught to David by Malcolm, who was a very charismatic person who loved sharing with others. His contagious positive attitude was amazing.

The last key was Tenacity, which was a particularly inspiring lesson taught by Jade. Jade took David on a long hike and spent time teaching him about using passion and action to never give up.

As the 5 lessons were over, there was still more for David. The author uses philosophy, his faith, and experience to share the keys that he hopes will help the reader to live their best life.