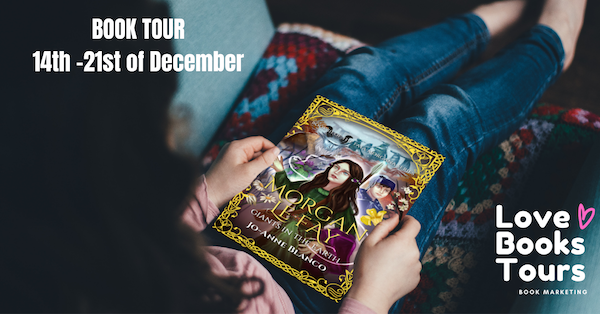 WHEN MONSTERS COME TO LIFE…

In the aftermath of Ambrosius’ attack on Tintagel Castle, young Morgan is sent away to the fortress of Dimilioc with her family, friends and tutor. But when bandits ambush their party, Morgan gets lost in the forest with nothing but her wits and her magic powers to rely on.

In her battle for survival, Morgan faces a cruel, hostile world that is suspicious, afraid and jealous of her magic. Silver-tongued faeries who are not what they seem. Vengeful Piskies and Muryans holding her friend Ganieda captive. Angry Giants and Spriggans who have awakened in the earth. And the ever-present threat of Ambrosius and his army, waiting to strike again…

To rescue her friends and outwit her enemies, Morgan must draw upon all her gifts, magic and mortal, in a perilous journey that will test her strength, faith and loyalty to the utmost…


The unfamiliar countryside rolled on and on as if it would never end.
Morgan had spent hours that day and the day before staring out of the window at rocky hills, autumn woodlands, and grassy valleys she had never seen before. Occasionally the Sun would peep out from behind the clouds, but for the most part the sky was grey and hazy with the oncoming of winter. Branches of brightly-coloured red and gold trees bowed under the weight of water from rain showers that fell on and off, spattering through the glassless window.
Morgan wondered if the Hyades, the Rainy Ones, were crying so much from the sky because she and her family had left Tintagel.
They were travelling in a wooden covered wagon with beams arching from the roof, dividing the sides into windows. At first Fleur looked eagerly out of the window with Morgan, but then the little princess got bored and went to sit beside their tutor Sebile, who was quietly reading one of the bound books she had brought with her. Morgan’s mother Igraine was lying on some sacks stuffed with feathers and covered with an ornate quilt. Morgan’s twin sisters Anna and Blasine, a year younger than her, played with their straw dolls on the floor inside.
Lady-in-waiting Halwynna watched them seated on a pile of cushions, clutching the side of the wagon and looking deathly white. Morgan and Fleur’s young maid Angharad was travelling behind them in an open cart with the pinch-faced kitchen maid Janniper and the food supplies. Morgan hadn’t been happy at all when she’d seen that Janniper was coming with them, knowing how cruel Janniper had been to the kitchen servants back at Tintagel. But it seemed Igraine had insisted on taking a cook to Dimilioc and Halwynna had picked Janniper.
Prince Vortimer had refused to ride in the covered wagon with them and rode on his horse alongside the guards. About twenty soldiers accompanied their party, chosen by High King Vortigern and Morgan’s father Gorlois, the Duke of Belerion, to protect them on the journey. Vortimer had insisted that his pasty-faced companion Prince Urien of Rheged ride with him, so the two boys rode outside together in the cold and the rain.
The only boy inside the covered wagon with them was Merlin. Being the same age as Morgan and Fleur, he was too young to ride with the others. He sat cross-legged in a corner on the opposite side of the wagon to Morgan. His face was expressionless as usual, his eyes dark as ever. He was holding a book in his hands, but Morgan didn’t know if he was reading it or not since she resolutely refused to look at him. He hadn’t looked at her or said a word to her either – or to anyone at all, in fact.
Morgan had tried to read as well, but the wagon was so bumpy that reading made her feel sick. Sebile had looked at her keenly and said that such nausea was usually something people felt at sea. The tutor said a famous physician called Hippocrates had discovered how sailing on the sea proved that motion disordered the body, but Sebile herself had observed that the same travelling motion could also affect people on land. The tutor gave Morgan an infusion of ginger to drink and told her to sit by the window and breathe deeply in the fresh air.