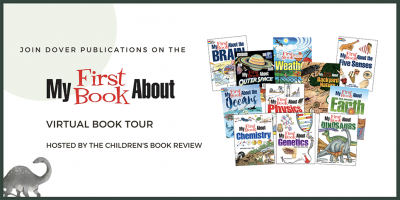 Post is made in partnership with The Children’s Book Review and Dover Publications.

My First Book About Dinosaurs

Publisher’s Synopsis: Welcome to the amazing world of dinosaurs! Children ages 8 and up can discover where these prehistoric creatures lived, the food they ate, and what they may have looked like. Along the way, they’ll encounter bone-crushing teeth, slashing claws, and spiked tails while learning fascinating facts about dinosaur eggs and fossils, moving continents, climate changes, exploding volcanoes, and even an asteroid crashing into Earth.

Other Books in the Series:

My First Book About Our Amazing Earth

My First Book About the Oceans

My First Book About Backyard Nature

An accomplished science and nature illustrator, Patricia J. Wynne is the recipient of the 2008 Theodor Seuss Geisel Honor and has won awards from Parenting magazine, the John Burroughs Association, and the National Science Teachers Association. Patricia’s artwork has appeared in galleries, magazines, newspapers, and more than 100 books for both children and adults. She is the illustrator of numerous successful Dover titles on science and nature, including My First Book About Outer Space and My First Book About the Body.

Trained as a research scientist, Donald M. Silver has written more than 80 books for students of all ages and for teachers. His One Small Square series takes a close-up look at plants and animals where they live. He has won numerous awards including the Children’s Science Writing Award in Physics and Astronomy from the American Institute of Physicists. He lives in New York City where he has worked with Patricia J. Wynne since 1981 and with whom he has co-authored numerous successful Dover titles on science and nature, including the “My First Book” series.

My FIRST BOOK ABOUT series is designed for children of all ages to get them interested in the wonders of science; to introduce them to facts, concepts, and ideas that they will encounter over the course of their lives; to engage their natural curiosity about the world around them and how their bodies work. The series is unique because of the range of topics that are covered, from the five senses to backyard life, the oceans, dinosaurs, physics, chemistry, engineering and more. It is a timely series appearing as STEM (science, technology, engineering and mathematics) courses take on greater importance from kindergarten through college.

In creating each book, we try to include both what is taught in schools as well as additional subjects that kids can easily grasp and will find interesting. No page is text heavy. Instead there are easy to understand captions that coordinate with the illustrations. The illustrations serve multiple purposes. For children who have not yet learned to read, coloring the illustrations introduces them to animals and plants, rocks and minerals, their muscles and bones, planets and stars, rocket ships and robots. For readers, the illustrations enhance the captions by helping to explain the science behind them. While the illustrations are technically accurate they never look like they belong in a textbook. Where appropriate we include women and men who contributed to the advancement of science as well as historical links to scientific ideas and advances.

What inspires us is making science accessible to children and proving to them that they can understand it. The series aims to reach out to both boys and girls who are interested in science, engineering, math, medicine, and/or technology. Nothing pleases us more than to hear that our books started a child on the path to becoming a scientist. We research each book carefully and where possible include the latest scientific achievements such as the recent landing of the Perseverance Rover on Mars and CRISPR technology that is the future of genetics At the start of each book we sit down and throw ideas back and forth about what a book should cover with the emphasis on what will interest and fascinate children. We create an outline that reflects the science and what can and should be illustrated. Once there is a final outline we begin our research, followed by sketches and text. Each book is a challenge. Rather than design the Physics books around machines and technical drawings, we were able to explain forces, motion and energy using mostly animals. The Dinosaur book keeps comparing dinosaurs to birds, providing scientific clues to why paleontologists  conclude that birds are living dinosaurs. Using the clues, we ask children if they agree or not, which invites them to think like a scientist. When the same illustration appears in different books with different captions it is our way of saying that the world around us can be looked at from the point of view of biology, chemistry, and physics, as can how the human body works. We are proud of this series and of the awards it has garnered.

Enter for a chance to win a set of four My First Science Books!