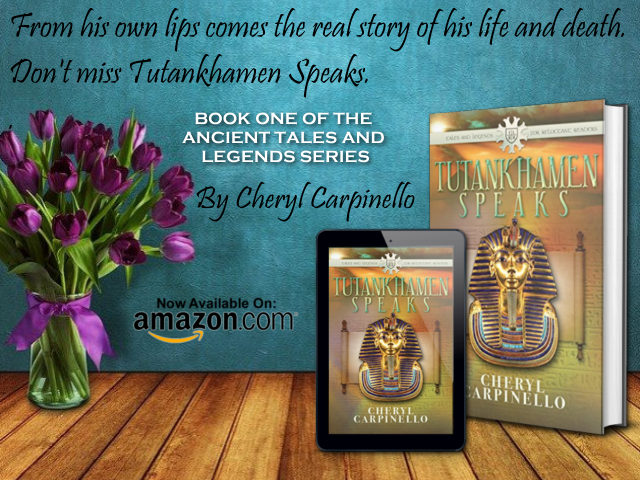 From over 3000 years ago comes the voice of the Boy King.

Scrolls found buried in the basement of the Egyptian Museum. Transcribed in an ancient hand. Record the words of King Tut for all to read.

Tutankhamen answers all of the lingering questions, including the big one.

Discover the real story behind this famous pharaoh. Transport yourself back to an Ancient Egypt filled with mystery, magic, and danger!

Growing up in Akhet-Aten

From the time I was able to walk, I had the run of our palace. Usually it was just me and Ankhesenpaaten. We played the normal childhood games.  We would run through the palace chasing and hiding from each other. The gardens and the pools were great places to hide. All too often one of us would fall into one of the pools as we raced by. Then we would move the game outside into the heat so that our clothes would dry. In Egypt’s heat, it didn’t take long. [missing text]

When I was small, palace carpenters made me toy boats. Sometimes these were made to resemble the barges that would carry crops and animals down and up the Nile from one settlement to another. Some were fully outfitted royal barges complete with sails and the poles used when the barge was moving up river. I started playing with these in the palace pools. Later, as I got better at loading them and maneuvering them, I would find a place near the palace where the Nile ran slower. There I would dig out canals for the boats to float in. Sometimes Ankhesenpaaten would help me. One time we had so many canals built that it took all afternoon for our crop barges and the royal barges to enter into the canal system and then sail through and re-enter the Nile. I loved those days with Ankhesenpaaten and the Nile.

In the evenings we would play Senet. My sisters and I became skilled Senet players, and our games would often last late into the night. My favorite were the casting sticks.

A grandmother’s gift usually bring happiness. Rosa’s gift: a very different story. Hearing the dead alienated her from classmates. Not good for a 15-year-old.

Many times very insistent, the dead cared little for her surroundings. They even bothered her in class. Dates? Forget that.

Then one day, he shows up in her room. An old dead guy. A really old famous dead guy. In living human form!

Thrilling story of battling good and evil in an ancient world.

A well-traveled dirt road leads back into the valley formed by the hills on either side. Although not high by my experience, rising up from the sandy floor, the Theban Hills are impressive. Jagged crevices run up and down the sides of the hills, and in many places, man-made square arches can be seen. The Tombs of the Pharaohs. I’m walking in the footsteps of an ancient people. How cool.

I hurry to catch up with him. A mistake, sweat stings my eyes and grit scrapes my cheek when I wipe my face. My shirt is sticking to me by the time I come even with him. Does Re never find a cloud to hide behind? Did I say Re? Now I’m starting to think as an Egyptian. Good grief. Must be the heat. There is no shade anywhere. Like a shimmering mirage on a hot highway, the heat rises in waves off the barren hillsides. No trees can withstand this burning furnace. The only shelter exists under the entrances to the tombs.

Tut hurries ahead, but I may never get here again, so I take my time. We pass one entrance, and I walk over closer to it. Heavy wooden doors covered in hieroglyphs bar the way. Ancient rope—rough, scratchy, and strong—twisted around the door handles and knotted tight, holds them closed. On the right door handle there is a clump of mud molded like those wax seals used on letters. It covers the handle and the rope. Symbols are pressed into it.

“Tut, what is this for and what does it say?”

He hurries over, curious.

“Why the rope and this lump of mud?”

“Lump of mud? Oh Roosa, you are looking at the Necropolis Seal placed here by the priests. That it is still here means that the tomb is intact. No one has entered since the burial.”

“Does the seal say whose tomb this is? Is it a pharaoh?”

“No, not a pharaoh. Here.” He points to a set of hieroglyphs. “These state that this is the tomb of the dignitary Ramose.” He pauses. “I remember hearing stories about him when I was young. He was the governor of Thebes during Thutmosis IV’s time.”

“Do all the tombs carry this seal?”

“Yes, but even in my reign, it was becoming difficult to keep the tombs sealed. Thieves continually broke in to steal the property of the dead.”

“Yes. When they were caught, their hands were chopped off.”

I gasp at such horrible consequences.

“You are shocked. I understand that in your time, there does not exist an undisturbed tomb here.” He waves his hand around the entire valley. “Who are these people who think they have the right to touch a Pharaoh of Egypt, even a dead one? They disturb our sacred resting places and steal the items left for our journey into the afterlife. May they all be cursed along with their families.”

I stand beside him, my mouth agape. Up to now, Tut has been determined in his mission, angry at Horemheb, but he hasn’t lost his composure. Until now. I try to find words to soothe him.

“They only want the world to know about the pharaohs of ancient Egypt. How magnificent they were. How they lived.”

He turns on me. “You don’t learn about a people by stealing what is sacred to them. In my time and yours, they are nothing more than common tomb robbers!”

“Scholars have shared what they learned. They search for knowledge. I learned about you from the artifacts in the exhibit.”

“Harrumph! What do you and they know? Nothing. Nothing at all! All you do is seek the treasures and the gold to make yourselves rich.” He spits in the dirt. “You wouldn’t know wealth if you were buried in it. Tomb robbers, the whole lot.”

He stomps away almost at a run, propelled by his anger. I hurry to keep up with him. We round a bend and to the left a small path winds up a cliff and then disappears. His chest heaves with ragged breaths and he’s actually vibrating he’s so enraged.

“We aren’t all like that, you know.” I whisper, wanting to avoid a harsh response. “Some of us understand that true wealth comes from within, from one’s heart, from love for others, and from respect for family.” I pause. “Some of us do.”

He says nothing; he doesn’t turn to look at me, but his breathing slows; his fingers unclench.

Cheryl Carpinello taught high school English for 25 years. During that time, she worked with numerous students who didn’t like to read for a variety of reasons. However, she discovered that even the most reluctant readers became engaged in the classroom and in reading when she introduced units on King Arthur and the works of ancient world writers. Upon retiring, she set out to write fast-paced, action-filled stories in these setting to encourage young readers to read more. When not writing, you can find her reading, spending time with family, and traveling.

“In 2008, my husband and I spent three weeks traveling around Egypt via train and visiting all those magnificent archeological sites. Since we returned home, Egypt has never been far from my thoughts. I truly believe that I left part of my soul in that ancient land. To satisfy my longing to return, I wrote Sons of the Sphinx and Tutankhamen Speaks.” Visit her on Twitter and Facebook.

OTHER BOOKS BY CHERYL CARPINELLO

If you love Book Tours, Book Reviews, and Giveaways, you’ll want to subscribe to the Lisa’s Reading Newsletter. (sidebar form)