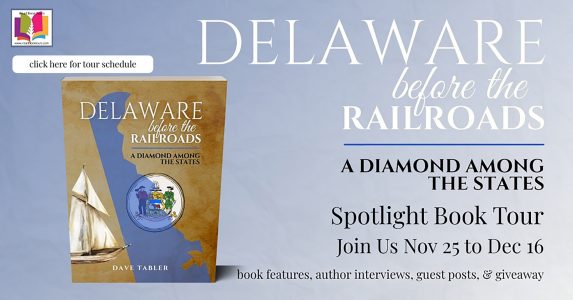 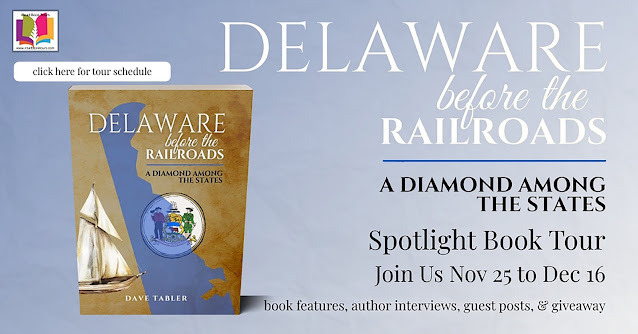 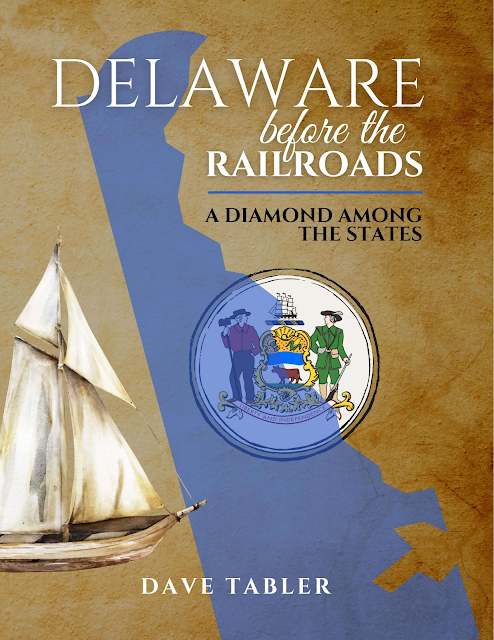 Book Title:  Delaware Before the Railroads: A Diamond Among the States by Dave Tabler
Category: Adult Non-Fiction, 100 pages
Genre: American History, Colonial
Publisher: Dave Tabler
Publication Date: Nov 2022
Tour dates: Nov 25 to Dec 16
Content Rating: G. None needed. Works for all audiences.
“Tabler debuts with a visual feast introducing readers to the First State before the golden age of the railroad. Drawing on photographs of locations, reconstructions, and historical objects, together with brief captions and rigorous notes, Tabler weaves a rich tapestry of industry, politics, and faith. He organizes the photographs roughly chronologically, tracking Delaware’s development from Swedish settlers to American independence, and dedicates space to images that reflect Delaware’s Native American history, as well as tracing the impact that enslaved people had on the state’s historical development.” – Booklife

“If you think you know Delaware, think again. Pirates? Quakers fighting with Pennsylvania? Towns so ugly no one would settle there? With stunning pictures and straightforward storytelling, Dave Tabler opens hidden passages and describes defining moments in this founding American colony. Telling this small state’s story gives you a sense of the big picture in American history. Enjoy this fresh look at Delaware through Dave Tabler’s eyes.” — Wendy Welch, author The Little Bookstore of Big Stone Gap

“Whether discussing the colored spear tips that showed the community if a person had been found guilty or not, to the stones that identified the Mason-Dixon Line, Dave Tabler’s book on colonial Delaware offers the reader a smorgasbord of interesting stories and photos of its early years. This is another book to add to collections about the beginnings of our country.” –– Sheila Ingle, winner, South Carolina Daughters of the American Revolution Historical Preservation Award for four of her young reader novels about South Carolina heroines during the Revolutionary War

“Thoroughly researched and well-written, Delaware before the Railroads offers a glimpse into the past through a present lens. Respected historian Dave Tabler utilizes colorful and intriguing photographs to tell Delaware’s foundational stories.” — Jan Loveday Dickens, Tennessee author and educator

“Dave Tabler’s impeccable research and clearly written descriptives tell a truthful and provocative story for anyone interested in the subject or doing research for other works covering the same period. The colorful and informative photographs tell the story of not only Colonial Delaware residents from 1638-1832 but our American forefathers in general. We learn about every aspect of their way of life during the most critical time of our country’s history.” — Lisa Soland, author, and senior editor of Climbing Angel Publishing

“Dave Tabler has crafted a concise and fascinating photographic account of early Delaware. “Delaware Before The Railroads” is definitely a book that should be in the collection of anyone interested not only in the history of Delaware but also in the history of colonial America.” — Steve Gilly, “Stories, A History of Appalachia” podcast

“Beautifully illustrated and presented in a unique format, ‘Delaware Before the Railroads’ is an easy and informative read-sure to appeal to Early American and Delaware history buffs.” –-Amelia E. Miller, Tennessee author and historian

“Tabler’s purpose, indeed, his mission, is to create a tribute to the culture and history of Delaware before the coming of the railroad. Consequently, he not only rediscovers the past, he also preserves and celebrates it with a montage of vivid images and an insightful narrative.” –– Gary Carden, author, storyteller, playwright
Book Description:

Delaware before the railroads arrived in 1832 was hotly contested real estate. Circle back to 1610 for a ride that takes you through culture clashes, colonization, revolution and beyond.
Buy the Book:
Amazon ~ B&N
Indiebound ~ BookShop
add to goodreads 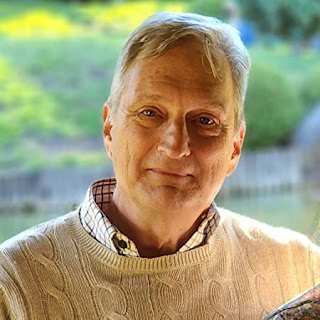 Meet the Author:Ten year old Dave Tabler decided he was going to read the ‘R’ volume from the family’s World Book Encyclopedia set over summer vacation. He never made it from beginning to end. He did, however, become interested in Norman Rockwell, rare-earth elements, and Run for the Roses.

Tabler’s father encouraged him to try his hand at taking pictures with the family camera. With visions of Rockwell dancing in his head, Tabler press-ganged his younger brother into wearing a straw hat and sitting next to a stream barefoot with a homemade fishing pole in his hand. The resulting image was terrible.

Dave Tabler went on to earn degrees in art history and photojournalism despite being told he needed a ‘Plan B.’

Fresh out of college, Tabler contributed the photography for “The Illustrated History of American Civil War Relics,” which taught him how to work with museum curators, collectors, and white cotton gloves. He met a man in the Shenandoah Valley who played the musical saw, a Knoxville fellow who specialized in collecting barbed wire, and Tom Dickey, brother of the man who wrote ‘Deliverance.’

In 2006 Tabler circled back to these earlier encounters with Appalachian culture as an idea for a blog. AppalachianHistory.net today reaches 375,000 readers a year.

Dave Tabler moved to Delaware in 2010 and became smitten with its rich past. He no longer copies Norman Rockwell, but his experience working with curators and collectors came in handy when he got the urge to photograph a love letter to Delaware’s early heritage.