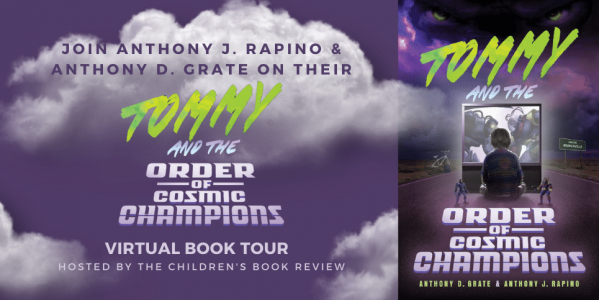 This post is in partnership with The Children’s Book Review, Anthony J. Rapino, and Anthony D. Grate.

If you know a middle-grade reader who would rather be reading comics than anything, this book will greatly entertain them. I don’t care for comic characters at all and I enjoyed this long book from beginning to end. It was filled with adventure and excitement. I’m not speaking about cartoon characters battling it out, but someththing more personal.

The main character is Tommy who is completing his last day of elementary school. He looks forward to summer with his best friend Evan. He soon finds out that Evan has dumped him. Summer continues to be bad for Tommy as his parents are fighting and ignoring him completly. Then he realizes that they are separating.

As Junior High begins in the fall, Tommy has great expectations that a new start will be good for him. On the bus the first day, he’s told that hazing could happen anytime. And, of course, he is selected. He is treated brutally, and then the entire school mocks him. He is snubbed by almost everyone, but he doesn’t tell his family.

All this time, he goes home to escape, but he only hears fighting and there’s no one to share his problems with. He’s lucky if he gets a frozen meal. He escapes in his comic characters and creates action stories for them. He does this so much that they start talking to them. So when he talks back, everyone thinks he’s talking to himself.

Tommy really needs serious help, but nobody notices him. Like so many bullied and neglected kids, parents and schools fail kids. Thankfully, Tommy can find a way to cope. He uses his comic friends to cope with the severe stress in his life.

There is quite a lot of comic violence, but most middle-grade kids will be used to this. The name of God is used twice to convey the all-powerful comic strength. There is one mild curse word, I believe. No sex at all.

I especially liked the book, as someone who loves reading about child development. Child neglect and abuse have such a devastating affect. Children who find a coping mechanism seem to have a much better chance of surviving the mental damage. I would recommend this book to parents of middle-grade children, as well. Learning what not to do could prevent a lot of damage.

Tommy and the Order of Cosmic Champions

When life supplies eleven-year-old Tommy Grant with some unfavorable circumstances intruding on his otherwise tranquil life in rural 1980s Ohio, he retreats into the spell-binding Order of Cosmic Champions. When he discovers that the largely successful animated program and toy line is holding a nationwide ”Create-A-Character” contest where applicants submit their action figure designs, Tommy knows he has to enter as surely as he knows his own name.

But when Tommy’s character design fails to win the contest, he finds his world crumbling from all sides. And there is only one way he knows to fix it. What follows is a whirlwind coming-of-age adventure of righting wrongs, overcoming perilous obstacles, confronting our inner demons, and challenging the limits of reality. In this waxing nostalgic and imaginative fantasy, readers will discover what excitement lies waiting when you take risks and conquer your fears.

Only one question remains: In the final hour when you heed the call, the courage to give your all, will you stand or fall?

Anthony J. Rapino resides in Northeastern Pennsylvania with his cats Luna and Poe. When he’s not writing speculative fiction, Anthony can be found in the classroom teaching English or crouched in dark alleyways sculpting horrific autumnal creatures out of clay. His work has appeared in On Spec, Acapella Zoo, Black Ink Horror, Madhouse, Liminal Spaces, and others. His novel, Soundtrack to the End of the World, and the story collection, Greetings from Moon Hill, are both available now.

Anthony D. Grate lived through the ’80s, from ages six to sixteen, by surviving on steady doses of Masters of the Universe, Kool-Aid that he put way too much sugar in, and BarNones. Occasionally he put pencil to paper and created comic strips to entertain his friends. He dreamed of one day working for Marvel or DC. Once out of college, however, he found himself selling furniture. Life sure is funny.

After a few failed attempts to use a new thing called ”the internet” to find a nice lady to share life with, a nice lady found him. They married and soon found themselves raising four children together. Meanwhile, in his spare time, Anthony tried desperately to appease the creative spirit dwelling within him. Comic strips, websites, books, board games, interactive online games . . . you name it, he probably gave it a shot.

Nowadays, Anthony juggles the responsibilities of a husband, father, business owner, and creator pretty well—or at least he thinks so. He lives in the same quiet corner of Ohio that he always has, with no plans of changing that. The guy’s not much for change, which is probably why he still watches Masters of the Universe and eats too many BarNones. He did ditch the Kool-Aid, however.

Enter for the chance to win an exciting Tommy and the Order of Cosmic Champions prize pack—including an Amazon digital gift card!

– A hardcover copy of Tommy and the Order of Cosmic Champions

– The Novel Soundtrack on USB/Cassette

– A hardcover copy of Tommy and the Order of Cosmic Champions

Tommy and the Order of Cosmic Champions Book Giveaway

10 thoughts on “Tommy and the Order of Cosmic Champions”