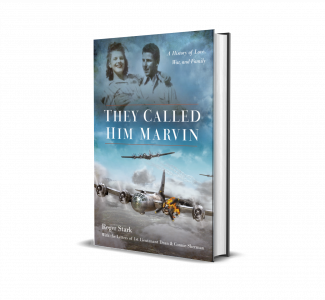 Book Title They Called Him Marvin

Duty called. He answered. She, with child, was left behind.

He did not come home.

Sixty-seven of their love letters help tell their story. In the final pages of this tragedy, love does conquer all.

I am, by my own admission, a reluctant writer. But some stories demand to be told. When we hear them, we must pick up our pen, lest we forget and the stories be lost.

Six years ago, in a quiet conversation with my friend Marvin, I learned the tragic story his father, a WW2 B-29 Airplane Commander, shot down over Nagoya, Japan just months before the end of the war.

My life has been profoundly touched in so many ways by being part of documenting this sacred story. I pray that we never forget, as a people, the depth of sacrifice that was made by ordinary people like Marvin and his father and mother on our behalf.

My career as an addiction counsellor (CDP) lead me to write “The Waterfall Concept; A Blueprint for Addiction Recovery,” and co-author “Reclaiming Your Addicted Brain.”

After my counselling retirement, I decided I wanted to learn more about the craft of writing and started attending classes at Portland Oregon’s Attic Institute. What I learned is that there are an amazing number of great writers in my area and they were willing to help others improve their skills. I am grateful to many of them.

My next project is already underway, a memoir of growing in SW Washington called “Life on a Sorta Farm.” My wife of 49 years, Susan and I still live in that area.

We raised seven children, and have eleven grandchildren. We love to travel and see the sites and cultures of the world. I still get on my bicycle whenever I can.

STANLEY CARTER started all this.

He was just a kid, a student at South High in Salt Lake City, Utah. A Mormon boy, as are many in the region, and a member of South’s ROTC program; in fact, the student commander of the Army ROTC at South. His duties occasionally took him to the Fort Douglas Army Base a couple of miles east of the city.

Entry to the base included the obligatory stop at the guard house, a box of a place parting the road at the fort entrance. Bookended by road barriers normally open and standing at attention during the daylight hours, visitors on foot such as the bus-riding Stanley Carter were invited to enter the building and make themselves known.

On this particular Saturday afternoon he presented his credentials to one Private Dean Harold Sherman, military policeman. Stan handed Dean his papers with the greeting, “Hello, Private Sherman. How are you doing today.”

The army blouse, complete with stark white name tag and chevrons of rank prominently displayed, made such identifications easy.

Dean studied Stan’s papers and without looking up, asked, “So, Stanley, are you heir to the Carter’s Little Liver Pills fortune?”

The question humored Stan. “That would be nice, but no such luck. I am just a high school kid with definitely not rich parents.

“How about you, Private Sherman?”

“Me? I am just a Montana ranch hand that came here for Basic Training and am now OJT with the military police.”

“You’re new to these parts then?”

“Been here a couple of months.”

“Do you know anyone in Salt Lake?”

“Other than military buddies, not a soul.”

“Yeah, I guess I do know one person from Salt Lake now.”

Stan wandered off to fulfill his post duties but he couldn’t stop thinking about the affable military policeman. After completing his errands, Stan went looking for Dean and was glad to find him still on duty, shuffling papers in the guard house.

“So, Dean, I have been thinking,” Stan said.

“You probably shouldn’t do too much of that,” kidded Dean.

“You’re right. It gets me in trouble all the time. Dean, I want to help you with your problem of not knowing anyone in Salt Lake.”

“What exactly do you have in mind?”

“Tomorrow I am going to my girlfriend’s house. Come with me. She would love to meet you, and then you will know two people here.”

Since his social calendar for Sunday, a non-duty day, was incredibly bare, Dean answered, “I could be talked into that.”

“We are going to meet up at church and then go to her house.”

So, there was that thing Mormons are known to do—veil an invitation to attend church so that it seems entirely harmless.

By the end of church the following day, Dean would actually know three people from Salt Lake City. This came about because Stan’s girlfriend, Carol Woffinden, happened to be the best friend of Constance Avilla Baldwin, who also just happened to attend the same Waterloo Ward of the Mormon Church, who also did not have a boyfriend, and who was also more than happy to make a visitor feel welcome.

Dean innocently walked into all of this.

Mormons have a special interest in non-Mormons, or Gentiles as they call them. You see, a Mormon is never far from, or without, his missionary zeal. If you’re not a Mormon and you’re going to hang out with a Mormon for very long, you’re going to get zealed. For Dean Harold Sherman, it was to be a life-altering dose of zealing.