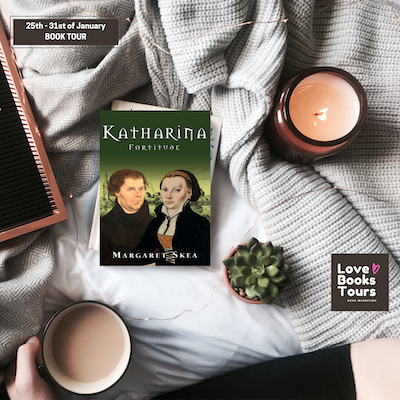 I received a digital copy of the book in order to review. All opinions are 100% my own.

We are none of us perfect, and a streak of stubbornness is what is needed in dealing with a household such as yours, Kat… and with Martin.’

Wittenberg 1525. The unexpected marriage of Martin Luther to Katharina von Bora has no fairytale ending.

A sign of apostasy to their enemies, and a source of consternation to their friends, it sends shock waves throughout Europe.

Yet as they face persecution, poverty, war, plague and family tragedy, Katharina’s resilience and strength of character shines through.

While this book can be read as a standalone, it is also the powerful conclusion to her story, begun in Katharina: Deliverance.

Authentic, immersive and packed with drama.

Margaret Skea grew up in Ulster at the height of the ‘Troubles’, but now lives with her husband in the Scottish Borders. Awarded the Beryl Bainbridge Award for Best First Time Author 2014 and Historical Fiction Winner in the Harper Collins / Alan Titchmarsh People’s Novelist Competition for her debut novel Turn of the Tide, the sequel A House Divided was longlisted for the Historical Novel Society New Novel Award 2016. The third book in the series, By Sword and Storm, is due for publication in July 2018. Katharina: Deliverance is the first of two novels based on the life of Katharina von Bora, the escaped nun who married Martin Luther. She is passionate about well-researched, authentic historical fiction and providing a ‘you are there’ experience for the reader. An Hawthornden Fellow and award-winning short story writer – recent wins include, Neil Gunn, Chrysalis Prize, and Winchester Short Story Prize. Placings and listings include Rubery Short Story, Historical Novel Society Short Story, Mslexia, Fish – Short Story and One Page Prize and the Matthew Pritchard Award. She has been published in a range of magazines and anthologies in Britain and the USA. –This text refers to the paperback edition.

The music stops, the sound of the fiddle dying away, the piper trailing a fraction behind, as he has done all evening. I cannot help but smile as I curtsy to Justus Jonas, his answering twinkle suggesting he shares my amusement.
‘Thank you, Frau Luther.’ And then, his smile wider, so that even before he continues I suspicion it isn’t the piping amuses him, ‘For a renegade nun, you dance well.’
It is on the tip of my tongue to respond with ‘For a cleric, so do you’, but I stop myself, aware that should I be overheard it would likely be considered inappropriate for any woman, far less a newly married one, to speak so to an older man, however good a friend he has been. And on this day of all days, I do not wish to invite censure. Instead I say, ‘I have been well taught. Barbara saw to that. She did not wish me to disgrace myself or her, and there is a pair of slippers with the soles worn through to testify to the hours of practice she insisted upon.’
‘She succeeded admirably then.’
All around us there is the buzz of laughter and chatter, an air of goodwill evident in every flushed face. Martin is waiting at the foot of the dais, and as we turn towards him, his smile of thanks to Justus is evidence he too is grateful for the seal of approval, of me and of the marriage, our shared dance a tangible sign to the whole town that Justus Jonas at least has no reservations regarding our union. Over his shoulder I catch Barbara’s eye and she nods also. I nod back but am unable to suppress altogether the inner voice, Tonight there is drink taken, tomorrow some may feel differently.
As if he can read my mind, Justus says, a new seriousness in his tone, ‘You have not made a mistake, either of you.’ He waves his hand at the folk clustered in groups along the length of the room. ‘Look around. When the difficult times come, as no doubt they will, remember tonight and the number of those who came to wish you well.’

Although I grew up a Protestant, I didn’t learn anything about Martin Luther until I went to college. Even then, I only learned of his theological writings and never heard much about his wife. This book has certainly changed that.

Katharina Fortitude is an amazing historical fiction book. I read it over a few days time, as I found time to get to it. Every time I saw my kindle waiting for me, I couldn’t wait to get back to the book. I really wanted to find out what was going to happen next.

The author did so much research to give us an authentic look into the lives and marriage of Martin Luther and Katharina von Bora. You may know about the temperament of Martin Luther, but with this book you’ll learn about how his wife lived with him and how she became one of the most important people of the Reformation.

The marriage of Martin Luther and Katharina von Bora was scandalous at the time, because she escaped being a nun. She faced gossip and outright hostility to her marriage. People in the town were even afraid that their first child would be the antichrist. But, Katharina also had many loyal friends.

She had six children, but lost children too. She was a real Proverbs 31 woman. She enabled her husband to do the writing and speaking that he was called to do as she managed home and expanded their holdings. She ran gardens, farms with animals, birthed six children, cared for orphans, and oversaw a huge home with boarders.

This book is such a wonderful read and Christian readers will love learning about the marriage. This is an inspirational book. You’ll laugh and cry all while being challenged to live out your faith as Katharina did. I would recommend it to everyone.