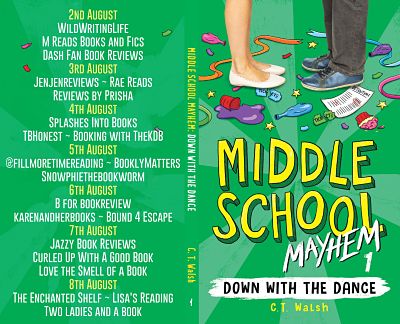 Down With The Dance Book Tour

Down with the Dance

Meet Austin Davenport, whose fabulous luck landed him on this earth only eleven short months after his brother, Derek, putting them in the same grade. While Austin’s brain power is unmatched, it appears as if his brother got all the athletic gifts and the family butt-chin, meaning their parents love Derek more than Austin, or so it seems.

Join Austin on his journey through the tumultuous waters of middle school as he navigates the swampy and undeodorized hallways and explores the depths of the cafeteria’s seafood surprise.

Oh, and someone is plotting to take down the Halloween Dance, the one that Austin has his sights set on, so he can take Sophie Rodriguez, a girl way out of his league, but who doesn’t seem to know it.

Can he stay one step ahead of the new principal who has it out for him? Will Austin figure out who the perpetrators are? Will he save the dance in time? Will he wear a diaper on a stakeout?

This first in a planned series of twelve will have you ROFLing like you never have before.

The funny and fast-paced nature of this series is meant for middle grade and early young adult readers.

Besides writing fun, snarky humor and the occasionally-frequent fart joke, I love spending time with my family, coaching my kids’ various sports, and successfully turning seemingly unsandwichable things into spectacular sandwiches, while also claiming that I never eat carbs. I assure you, it’s not easy to do. I know what you’re thinking: this guy sounds complex, a little bit mysterious, and maybe even dashingly handsome, if you haven’t been to the optometrist in a while. And you might be right.

My goal with my writing is to engage young readers with fun and adventure. With so many competing forms of entertainment available to our kids (and so many of them mindless), I really try to provide a reading experience like no other.

I value the importance of combining fun with learning and life values. My stories are humorous and adventurous with strong characters and solid life lessons with some potty humor sprinkled in. You gotta give the kids what they want…Hey, it’s better to read fart jokes than to play video games, right?

Getting middle school children to read can be tough sometimes. Boys can start saying that they hate to read and this book could definitely change their tune. This book is the first in a series of crazy adventures in a middle school. Austin is a stereotypical nerdy kid who has an older brother who is rotten. As Austin and his best friend Ben try to survive middle school, Austin’s brother Derek wants to make his brother a laughing stock. He embarrasses poor Austin in terrible ways, but Austin isn’t about to give up.

There are one after another wild and crazy experiences and it appears that there is no end in sight. It would be so horrible if these experiences actually happened. Because most kids can relate to this just a little, everyone will laugh out loud at the ridiculous life of Austin. There are tons of bathroom jokes, crude humor, and seemingly clueless adults. But, kids will want more.