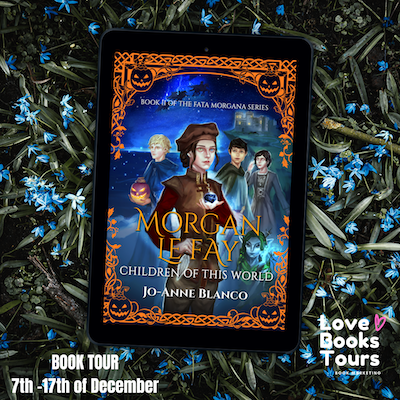 Morgan Le Fay: Children of This World by Jo-Anne Blanco

A STORM IS BREWING … Brothers Ambrosius and Uther Pendragon have landed in Belerion with an army raised to fight High King Vortigern. Supporters of the High King gather at Tintagel, seat of Morgan’s father the Duke of Belerion, as they prepare for battle. Ominous clouds of war hang over the castle, treachery lurks in the shadows, and rumours abound that Ambrosius is being aided by a powerful dark force from the past … Since Morgan’s encounter with the Piskies and the Muryans, the faerie tribes have united against her, vowing revenge. Meanwhile, her powers are growing faster and stronger, her dreams and visions more potent. On Samhain night, when the veil between the worlds becomes thin, Morgan resolves to summon Diana the Moon Huntress to her once again, with terrifying and tragic consequences …

Downstairs in the stables, several grooms and squires were leading horses into stalls. The stables were very crowded; there wasn’t enough room for all the horses to fit. Arguments were breaking out over which horses should go where. Some squires were leading their masters’ horses back out again.
Morgan caught sight of Safir standing in the stall beside her father’s brown courser horse Swiftback, arguing with another squire, an older, sandy-haired boy, holding his master’s horse by its reins. Like Fleur, Safir stood out from everyone else by looking so different, with her raven hair cropped very short, her dark brown skin, and her big, beautiful black eyes. Even in disguise, Safir was so pretty it was often hard to remember that they were supposed to pretend she was a boy.
“You take that horse outside the gate!” Safir was saying angrily to the other squire. “This is the Duke’s horse and this is his stall! He cannot share it! There’s no room!”
“Don’t tell me what to do, you filthy Moor!” the sandy-haired boy snarled. “What the hell are you doing here anyway? What’s Duke Gorlois think he’s doing, employing black scum like you?”
Safir’s eyes turned ice-cold.
“I am the Duke’s squire and I am telling you to get out! So getout, you sick-faced latrine rat!”
The sandy-haired boy’s fist clenched. He was going to hit Safir.
“No!”
Morgan rushed forward, dodging her way through the stable until she reached Safir. She stood in front of her friend, looking up at the sandy-haired boy.
“I’m the Duke’s daughter! Don’t you dare!”
The sandy-haired boy looked her up and down with contempt. “You? The Duke’s daughter! Swive the saints! Get out of the way, you little bitch, or I’ll do you, too!”
“She is the Duke’s daughter, you fool!”
Another older boy, tall and gangly, was standing behind them. Morgan knew this boy as the squire of her father’s seneschal Sir Brastias, but she had never heard his name.
“You’d better take that horse out,” the gangly boy said to the sandy-haired one. “They’re setting up some pens outside the gate.”
Muttering to himself, the sandy-haired boy led his master’s horse out of the stable, casting a look of hatred back at Safir as he did so.
“Thank you,” Safir said to the gangly boy. But to Morgan’s shock, the gangly boy gave Safir a look every bit as hateful as the one the sandy-haired boy had given her, before turning on his heel and walking away.
Safir let out a deep breath.
“Are you alright?” Morgan asked her.
The squire smiled ruefully. “Yes, I am alright. It happens a lot.”
“You should tell my father!” Morgan exclaimed. “Or I will!”
“No!” Safir said, shaking her head. “Don’t tell him, Morgan, please. I have to be strong if I am to be his squire – if I am ever to be a knight. I don’t want the Duke to think that I am not strong enough.”
Morgan wasn’t happy about this. But before she could argue further, someone called her name and she turned to see Fleur, dressed in a bright red hooded cloak, stepping daintily over the dirty floor of the stable towards them.