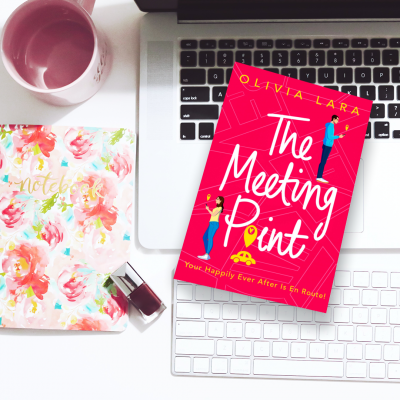 The Meeting Point by Olivia Lara

What if the Lift driver who finds your cheating boyfriend’s phone holds the directions to true love?

‘Who are you and why do you have my boyfriend’s phone?’

‘He left it in my car. You must be the blonde in the red dress? I’m the Lift driver who dropped you two off earlier.’

And with these words, the life of the brunette and t-shirt wearing Maya Maas is turned upside down. Having planned to surprise her boyfriend, she finds herself single and stranded in an unknown city on her birthday.

So when the mystery driver rescues Maya with the suggestion that she cheers herself up at a nearby beach town, she jumps at the chance to get things back on track. She wasn’t expecting a personalised itinerary or the easy companionship that comes from opening up to a stranger via text, let alone the possibility it might grow into something more…

Come on this 5* journey to love, laughter and back again, perfect for fans of Mhairi Mcfarlane, Josie Silver and Sally Thorne.

Author Bio
Olivia Lara’s love for words started as a child when she spent her summer vacations watching her grandfather, who worked for the biggest publishing house in Romania, edit hundreds of books. She is a former journalist for a newspaper and a television network in Bucharest, now a Marketing VP in San Francisco – in between she lived in France where her love for Paris and the Alsace region was born. Her first book, Someday in Paris, became a B&N, Apple, Kobo and Amazon Top 100 Bestseller and was shortlisted for the Romantic Novel Awards. She lives in the Bay Area, California.

This was a truly delightful book. As a reader of many romance books, this one was a charming clean read with a surprising set of turns throughout. Maya had traveled to surprise her boyfriend of five years while he was in California. But, then she received a mysterious text from his phone. It wasn’t him, but instead was the Lift driver who found the phone left in his car.

The mysterious driver continued to text her on this her birthday. She was told that he was with a blonde and was kissing her. Maya was so depressed and lonely. The driver began texting her about all the beautiful places she could go and see. As she finished with one of his recommendations, he then messaged her about another place. In the end of the day, they were to meet. Her boyfriend showed up and convinced her to go away with him, while the driver looked on this from a distance.

She felt bitter that he didn’t show and he was bitter that she chose the cheating boyfriend. A year later, she goes back to this beautiful area (Carmel by the Sea, CA). After many unbelievable circumstances, she starts working at his sister’s cafe. They get to know each other, but she doesn’t realize that he’s the Lift driver (think “You’ve Got Mail”). The way the story wraps up is really wonderful. I think you’ll love this one.