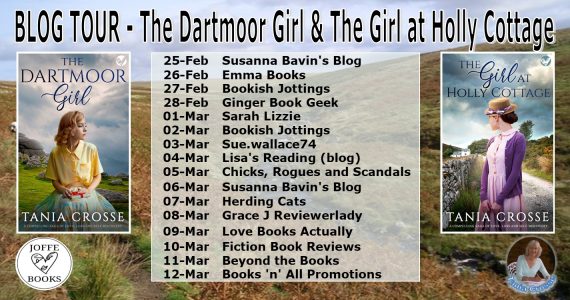 A dramatic and poignant tale of one girl’s quest for the truth.

Dartmoor, 1952. When fifteen-year-old Lily Hayes loses her mother, she finds herself at a crossroads: go to a children’s home or leave the bright lights of London to live with her estranged father in the wilds of Dartmoor.

Lily moves from London to Dartmoor determined and excited to find out the truth about where she came from.

Her dour father, Sidney, can be sullen and he has a temper on him. He seems to want nothing to do with her, but Lily vows to make the best of things. There are some things she is grateful for — especially the handsome and charming Edwin Franfield.

As Sidney’s gruff manner gradually thaws, Lily learns a little more about her family’s history — and discovers that some secrets are better left untold.

Will Lily discover her true identity and find happiness among the dramatic wilderness of Dartmoor, or will the past drive her back whence she came?

“Totally in love with this book! Highly recommend!” Sayury

“Crosse writes with passion . . . so well you can actually envisage yourself there.” Novelle Novels

“At first, I thought it was a standard love story. Then about halfway through it became so much more.” Mrs Gray

Tania Crosse was born in London, but at a young age, moved to Surrey where her love of the countryside took root. She wanted to be an author since childhood, but after obtaining a degree in French Literature, life took over. It wasn’t until her children were older that she began writing seriously. She has now had published nine historical novels set on her beloved Dartmoor, while The Street of Broken Dreams, the last of four Twentieth Century sagas set in London and the south east, won Best Saga in the 2020 awards of the Romantic Novelists’ Association.

The talented author kept my attention from page one. Her descriptive writing was so interesting! The story of a teen who’s life is turned completely upside down when her beloved mother dies. So soon after the end of WWII, there are many orphans, and she is afraid to be sent to the home for orphans. She has the choice to go live with her real father in Dartmoor. Leaving London is truly frightening when she meets the cold and angry father at the train station. She finds herself living without heat, electricity, or even running water.

She’s a strong young woman and over time becomes more friendly with the man. She gets a job in Woolworth’s and makes some wonderful friends. Her favorite thing is walking on the moors. Before her father dies, he tells her that her mother had an affair and that she really wasn’t his daughter. After he dies, she is taken in by the doctor’s family and she falls in love with the son, Edwin. She also becomes friends with his best friend, Daniel. She also wants to find out who her real father is, but her father died too soon to tell her much about her family.

The story is beautifully written and will draw you in as you feel close to each of the characters. The story is wholesome until the end, when a sex scene is explicit. (PG-13+)