Welcome to the Blog + Review Tour for After the Prodigal Returned by Cassandre Brissot, hosted by JustRead Publicity Tours! 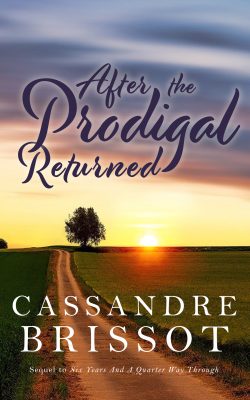 Title: After the Prodigal Returned Sequel to: Six Years and a Quarter Way Through Author: Cassandre Brissot Publisher: Independently Published Release Date: November 5, 2021 Genre: Christian fiction/romance The sequel to Six Years And A Quarter Way Through, After The Prodigal Returned, is a relevant tale about the guilt that condemns and the remorse that leads to repentance. Leah Albanese thought the hard part was over. Little did she know it had only just begun. It’s been seven months since Leah heeded God’s voice and returned home to the life she was all too happy to flee. She quit Star Quality, the reality show that was her best and possibly last chance at stardom. Leah gave back the six-carat diamond engagement ring and sent Trenton Shaw packing. When filming for the reunion episode brings familiar faces back into her life, some welcome some not, Leah begins feeling the same tugs at her heart that led her to stray from God in the first place. Can Leah resist temptation, or will she go back to the things, future, and fiancé she gave up? Leah came back. She never imagined staying would be the real challenge. What happens after the wayward daughter returns home? PURCHASE LINKS*: Goodreads | Amazon

Cassandre Brissot is a Brooklyn, NY native. She earned her bachelor of fine arts in television and radio production at the City University of New York Brooklyn College. Cassandre is the author of Six Years and A Quarter Way Through. When she’s not writing for her blog, she enjoys dance parties with her nieces.CONNECT WITH CASSANDRE:Website | Facebook | Twitter | Instagram

Total chaos erupts on set; I don’t know who’s saying what. The questions are coming from everywhere. Everyone’s speaking over one another, wanting to know if what Beverly said is true. Like my castmates, this is the first time I hear this version of events, although it doesn’t surprise me. Amy, the producer who disliked me probably as much as Beverly, promised something like this would happen if I walked out on the competition. Actually, I’m impressed they were able to put together such a credible story. It was a stroke of brilliance on their part.

Beverly revealed I suffered from panic attacks during week three. The judges were concerned I wouldn’t be able to deal with the pressures of the industry. According to the producers, my apparent hostility, violent outburst, and sudden departure proved I couldn’t. The groundwork was laid long before I left the competition. All they had to do was pour the cement.

I look past Aiden and Cashmere at Beverly; she’s the picture of unbothered. To her credit, she doesn’t give anything away. She was able to maliciously answer Ileyana’s question without appearing to be so. It’s the best acting she’s ever done.

I could just let it go, take the high road, but I’m not in a let-it-go kind of mood. I sit up taller in my seat, blood simmering.

“Leah,” Brice whispers behind me, his voice a plea to exercise restraint. I appreciate his concern, but my mind’s made up. He’s not talking me out of this.

“Actually, I left because I discovered the show was rigged. Beverly was going to win no matter what.”

(1) winner will receive a copy of Six Years and a Quarter Way Through, a copy of After The Prodigal Returned, and a $25 Amazon gift card!

Be sure to check out each stop on the tour for more chances to win. Full tour schedule linked below. Giveaway began at midnight January 31, 2022 and lasts through 11:59 PM EST on February 7, 2022. Winner will be notified within 2 weeks of close of the giveaway and given 48 hours to respond or risk forfeiture of prize. US/CAN only. Void where prohibited by law or logistics.

If you love Book Tours, Book Reviews, and Giveaways, you’ll want to subscribe to the Lisa’s Reading Newsletter. The Sign-up Form is on the sidebar.

9 Replies to “After the Prodigal Returned Blog & Review Tour”