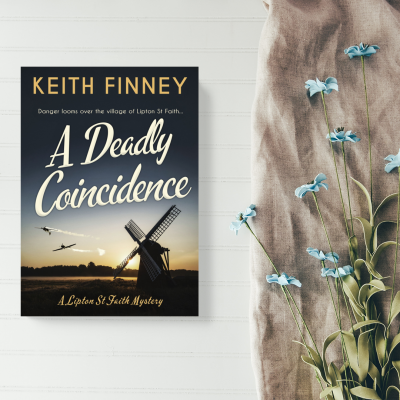 A Deadly Coincidence by Keith Finney

A deadly secret in the heart of a quiet country village.

In sleepy Lipton St Faith, the locals are getting used to their new rationing books and blackout curtains. The Second World War has brought much change to the small Norfolk village, as well as Lieutenant Eddie Elsner, on a mission all the way from America. But when the local postman is found dead, suddenly the war feels much closer to home…

The police are quick to declare it an unfortunate accident, but young, spirited Anna Grix is less convinced. After striking up a fast friendship with the newly arrived American, she teams up with Eddie to dig into this apparent accident.

Full of unexpected twists and turns, A Deadly Coincidence is a perfect read for fans of LJ Ross, Joy Ellis, Faith Martin and Elizabeth Edmondson.

Author Bio
Keith is British and was born in the United Kingdom; grew up playing the horn in Brass Bands, and earned pocket money delivering newspapers. Between leaving school and taking up his apprenticeship in carpentry, Keith sold ice cream at a drive-in tourist park.

Discovering construction sites involved working in the wind and rain, which he hated, Keith opened a joinery workshop. He ran this until becoming a college lecturer ten years later.

Over the following twenty years, he steadily rose through the ranks, ending up as an Assistant Principal at a large college of further & higher education in Norfolk.

Now retired, Keith divides his time between writing, volunteering for the National Trust and helping child-mind his two youngest grandchildren. However, his wife calls into question Keith’s definition of ‘helping’.