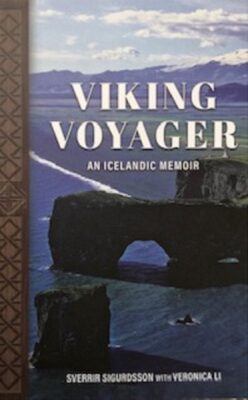 by Sverrir Sigurdsson with Veronica Li

This vivacious personal story captures the heart and soul of modern Iceland. Born in Reykjavik on the eve of the Second World War, Sverrir Sigurdsson watched Allied troops invade his country and turn it into a bulwark against Hitler’s advance toward North America. The country’s post-war transformation from an obscure, dirt-poor nation to a prosperous one became every Icelander’s success. Spurred by this favorable wind, Sverrir answered the call of his Viking forefathers, setting off on a voyage that took him around the world.

One memorable incident took place [in 1968] during our drive through Anbar province in Iraq. The place was unheard of when I motored through, but after the U.S. invasion of Iraq in 2003, this Sunni stronghold of Saddam Hussein’s became world renowned for insurgency and suicide bombings. Even during my days, traveling in this neighborhood was dicey. While guessing my way through the desert of Al Anbar, we passed a ghastly sight. It was the charred remains of what looked like a small industrial complex. The scene evoked news articles about an Israeli air raid on an Iraqi nuclear research facility. I knew we shouldn’t be there, but there was no other way out than to keep driving. Soon after, a military patrol pulled up alongside. I stopped the car, and we all got out to show them exactly who we were, a family of dumb, lost foreigners.

A soldier peered into my car. He started shouting angrily in Arabic, his finger jabbing at the camera on the back seat. They hustled us all back into the Peugeot, I in the driver’s seat, Monika next to me, while Steinn shared the back seat with the soldier. I felt something hard poke at my spine. I glanced at the rearview mirror and realized the object was the muzzle of the soldier’s machine pistol. The drive lasted an hour at most, but it seemed like eternity. To prevent an accidental burst from the gun, I took it slow and easy on the desert tracks.

Sverrir Sigurdsson grew up in Iceland and graduated as an architect from Finland in 1966. He pursued an international career that took him to the Middle East, Africa, Asia, Eastern Europe, and the U.S. His assignments focused on school construction and improving education in developing countries. He has worked for private companies, as well as UNESCO and the World Bank. He is now retired and lives in Northern Virginia with his wife and coauthor, Veronica.

Veronica Li emigrated to the U.S. from Hong Kong as a teenager. She received her Bachelor of Arts in English from the University of California, Berkeley, and her master’s degree in International Affairs from Johns Hopkins University. She has worked as a journalist and for the World Bank, and is currently a writer. Her three previously published titles are: Nightfall in Mogadishu, Journey across the Four Seas: A Chinese Woman’s Search for Home, and Confucius Says: A Novel. Her website is www.veronicali.com.

One randomly chosen winner via rafflecopter will win a $50 Amazon/BN.com gift card.