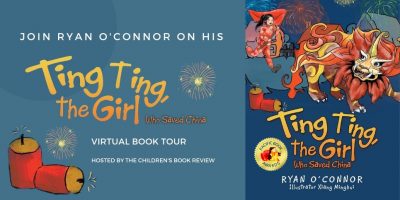 This post is in partnership with The Children’s Book Review and Ryan O’Connor.

Publisher’s Synopsis: Li Li Wang is enjoying Chinese New Year with her family when her grandparents ask her to sit with them. Before giving Li Li her holiday gift, they tell her the story of Ting Ting Wang, Li Li’s ancestor, and how she became a Chinese hero. Li Li carefully listens as her grandparents tell her about Ting Ting, the monster Nian, and the origin of the Chinese New Year celebration. Ting Ting, the Girl Who Saved China provides insight into China’s biggest holiday, gives a sense of its culture, and shows that girls are just as strong and brave as boys.

Ryan O’Connor is a literature and writing teacher in Shanghai, China, and the author of the children’s book series Bobby the Bear. With a background in sports journalism and education, Ryan has turned his focus to writing children’s books. Through unique characters, Ryan provides children with moral and life lessons. Ryan has earned a bachelor’s degree in journalism and a master’s degree in education; he has also won numerous awards for sports writing. Ryan is a native of Pittsburg, Kansas, but has spent the past ten years living in Shanghai.

To learn more about Ryan and his books, visit his website at www.ryanoconnorauthor.com.

Ting Ting, the Girl who Saved China is a lovely picture book with colorful illustrations. The story is centered around the dinner table of Li Li Wang, her parents and grandparents. It’s the eve of Chinese New Year and the family is preparing to celebrate the important holiday. Li Li’s grandfather asks her if she knows the story of their ancestor, Ting Ting Wang? Li Li hasn’t heard that this hero of China was a member of their family.

The grandfather starts telling the story of China and how a monster named Nian terrorized the people there. Nian was a Chinese dragon who would come to different villages and eat all the people’s food and animals and tear down their homes. No one could figure out a way to keep Nian from coming to their village.

Then a little girl named Ting Ting came up with an idea. She tried to tell her friends and others in the town, but no one listened to her. Her family members were afraid when they hear a roaring sound. They knew that Nian was coming their way, but had no way to stop him. Would Ting Ting know what to do? Would Nian eat all their food? This delightful book will entertain and inspire children to be a hero like Ting Ting.

Enter for a chance to win a set of books by Ryan O’Connor, including Ting Ting, the Girl Who Saved China!