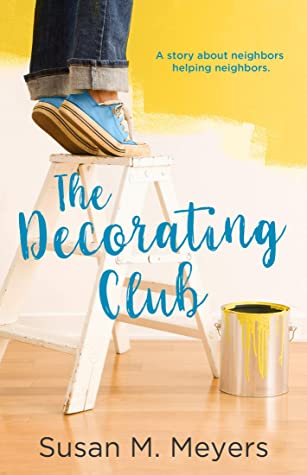 Welcome to the Blog Tour for The Decorating Club by Susan M. Meyers, hosted by JustRead Publicity Tours!

Title: The Decorating Club Author: Susan M. Meyers Publisher: Just Food For Thought, LLC Release Date: February 1, 2021 Genre: Women’s FictionThe Decorating Club shares the story of what happens when a group of women come together to help each other redesign their homes. In the process, they support each other through some of the challenges encountered by women today. While the primary focus is on identifying the best purpose and theme for each room they soon find themselves faced with the need to help one another determine life’s next chapter. The Decorating Club was inspired by true-life experiences with real neighbors and the friendship they shared.

Susan Meyers is an optimist who believes the world would be better served if everyone were more aligned with their greater purpose. The challenge as she sees it is not only to serve one’s purpose but also to adapt as it changes from time to time.

While Susan has worn many hats throughout her life, serving as CEO of her children’s business, 3 Sisters and a Brother, LLC is the role of which she is most proud. It began in the family’s basement when they were just 12, 12, 10, and 7 and soon expanded into two storefronts; within less than eight years, it became a well-known brand in the local community. As time passed and each of the children began to take flight, Susan and her family made the decision to close the business. With each of her four children off pursuing their own individualized dreams and careers, Susan had to deal with a new title; unemployed CEO; as well as the closed doors that it represented for her more personally. Finding herself questioning her own purpose and determined to regain it, Susan invested her time looking for answers. It soon became clear that none of the information she found talked to her concerns or even spoke the same language. Eventually, Susan was reminded of what she already knew and in the hope of helping others facing similar challenges, was moved to write The Decorating Club. Today, Susan makes her home with her husband and youngest daughter in Fairfield, CT. For more information, visit www.susanmmeyersauthor.com.
CONNECT WITH SUSAN: Website | Facebook | Instagram
Extract
Some would classify Jackie and Steve as almost “empty nesters,” a title Jackie wasn’t very happy with. She said she preferred to look at themselves “more like part-time landlords since our children are always coming and going. Besides, I have a hard time viewing my four kids as birds. While they may twitter and tweet, it’s hardly the kind that would bring music to your ears, and the concept of eating like a bird is totally foreign in our family. In fact, every time all of them are home together, our food costs go through the roof!” The girls laughed at Jackie’s comments, but each could sense there was pain behind her witty sarcasm. Staring blankly off into space, Jackie continued, “And while they like to think they can soar with the eagles, the funny thing is almost all of them suffer from motion sickness. Yeah they sure drive me nuts, but I have to admit, the house is noticeably barren when they’re not around. I don’t know, but somehow it seems that when they’re young we trick our minds into thinking these days will never come or at least it’s not something we need to worry about just then because it’s still a lifetime away. But, boy, once they hit middle school, the time just rolls on by.” The room went quiet as they watched Jackie wipe a tear that had rolled down her face leaving a black streak in its trail. “Well,” said Sarah as she reflected on Jackie’s vivid examples, “that may be true, but I’d like to point out that there’s a lot of empty nests around my house and I’ve yet to see a mother bird just sitting there waiting for her chicks to return. Hey, Jackie, I have an idea: why don’t we make your home our first project. Does that sound okay to you?”

Full tour schedule linked below. Giveaway began at midnight August 17, 2021 and will last through 11:59 PM EST on August 24, 2021. Winner will be notified within 2 weeks of close of the giveaway and given 48 hours to respond or risk forfeiture of prize. US only. Void where prohibited by law or logistics.