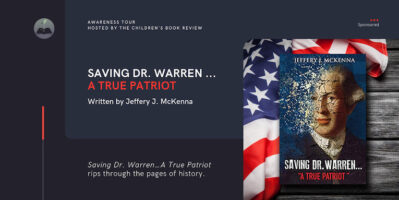 Visit Jeffery J. McKenna’s website for plenty of free educational resources that have been created specifically for Saving Dr. Warren… A True Patriot. You’ll find lesson plans, an essay contest, as well as information about author visits. This historical-fiction novel has been used in several middle school classrooms as a resource for both History and English teachers—it is a great educational tool for parents, librarians, and teachers.

The novel Saving Dr. Warren… A True Patriot answers that question through the eyes of a 14 year old boy.

Steve O’Dell loves to write and does it well. But as an eighth-grade student at Needham Middle School, his talent sometimes seems more an embarrassment than a blessing.

Then, on Veterans Day 2001, Steve’s award-winning essay propels him into an adventure twisting through Revolutionary battles and bloodshed. Thanks to the bizarre bequest of a manuscript and a musket ball from a long-lost family war hero, Steve’s journey with the Revolutionary War hero Dr. Joseph Warren begins.

A time-traveling talisman missing from the archives of one of Boston’s oldest historical societies takes Steve through portals of history, where he walks side by side with a real Boston patriot. He makes house calls with Dr. Warren on March 5, 1770, and stumbles onto the bloodstained streets of the Boston Massacre. From the killings of March 5 to boarding tea ships in 1773, Steve’s history book explodes to life as he helps Dr. Warren and forges a friendship with Boston’s True Patriot. Steve watches Dr. Warren launch Paul Revere on his midnight ride, and he helps Dr. Warren dodge British musket balls in the first battles of the War for Independence. With each adventure, Steve tastes the light that ignites The Revolution.

Steve will eventually convince others that the Revolutionary relic he was given really does open portals through time, but he faces his most difficult quest alone—saving Dr. Warren from the onslaught at Bunker Hill. Can he do it? And if he fails, will he ever return to this century?

Saving Dr. Warren…A True Patriot rips through the pages of history. From the Revolutionary War to the vanishing veterans of World War II, to the ashes of September 11, 2001, Saving Dr. Warren demonstrates to both old and young that patriotism, standing like an old oak tree on a grandfather’s farm, has and will endure.

Jeff Mckenna resides in a peaceful Southern Utah town amidst the red rocks that make up National Parks like Zion and Arches. He loves mountain biking over the brightly colored sandstone that surrounds him, as well as new trails he finds when he goes on cross-country RV trips with his wife. Along with reading entertaining historical fiction novels, Jeff believes a great way to learn to love America is by exploring her beautiful landscape and visiting cities and states from sea to shining sea.

Jeff’s love for his country is what has fostered his love for writing. Uncovering America’s history can be messy, but Jeff dives in with both hands to uncover what lies hidden in our nation’s past. He loves to reveal forgotten heroes and help them come alive for young Americans as they race through the pages of his historical fiction novel, Saving Dr. Warren… “A True Patriot.”

Jeff would love to hear about the American heroes you’ve discovered as you’ve dived into history! For more information, visit https://www.jefferyjmckenna.com

I really like historical fiction. I enjoy learning about history and real people while enjoying an engaging story. I love it when the story intertwines with actual historical events. I tried very hard to do that in Saving Dr. Warren.

Twenty years ago, I learned about Joseph Warren. I was amazed at all that he did. I was even more surprised that I, with 99% of other Americans, had never heard of him!

I wanted to tell his story. I wanted it to be for America’s youth, for the future citizens of a country he didn’t live to see. You can’t tell Joseph Warren’s story without it being “patriotic.” 🙂

I’m not a very proficient writer. I hope to complete my next book in less than twenty years. 🙂

I’ve decided I have three books in me. Each book will tie to one of my three great loyalties (God – Family – Country). Saving Dr. Warren… “A True Patriot” focused on ‘Country.’ The next book will focus on family.

I’ve become attached to my four main characters: Steve, Grace, Rob, and Curtís. They will continue to grow together. Also, Frothingham and his Society will be a key part of the main characters’ future adventures.

In book two, we will learn more about Curtis and the Society that guards the time-traveling talismans.

Four years of college and three years of law school involve a lot of writing. However, the writing style I learned during these seven years was very different from writing a novel. Nobody enjoys reading a legal contract or trust. 🙂

I completely rewrote Saving Dr. Warren… “A True Patriot” three times. These rewrites were primarily required because I was learning to write. They were also needed because I listened and learned from the target audience—8th-grade middle school readers.

I’ve read a lot of books. I’ve tried to learn the craft of writing. On Writing: A Memoir of the Craft, by Stephen King, was my personal “writer’s Bible.”

The Elements of Style by William Strunk Jr. is a second book that I relied on. I’d read it before reading Stephen King’s book. Mr. King is a fan of Strunk’s book and quotes it often.

These two books were the foundation of my education in creative writing.

Wilson Rawls. He wrote Summer of the Monkeys and Where the Red Fern Grows. He was not a prolific writer. These were his only published books.

My fourth-grade teacher, Mrs. Johns, read both of Rawls’ books out loud to our class. I’ve been exposed to other novels and books, but Rawls’ masterpiece of a boy and his dogs cast a spell over me as a ten-year-old that I’ve never forgotten. Since fourth grade, I’ve experienced the warmth of the story dozens of times. I can still remember those first feelings of being moved by a book over 40 years ago.

Beyond the books, Wilson Rawls’ personal story captured in Jim Trelease’s audible production, Dreams Can Come True, motivated me more than any other story to continue my quest to write a story. Like me, Wilson Rawls was older when his book was published. He always wanted to write a book but questioned his ability. His love for those he wrote for is evident in his personal story and in his books.

Those words are still hard for me to apply to myself.
I am a husband.
I am a father.
I am an American, an attorney, a former soccer coach, and a mountain bike rider.
I hope that someday I’ll be able to look at myself in a mirror and see a “writer.”