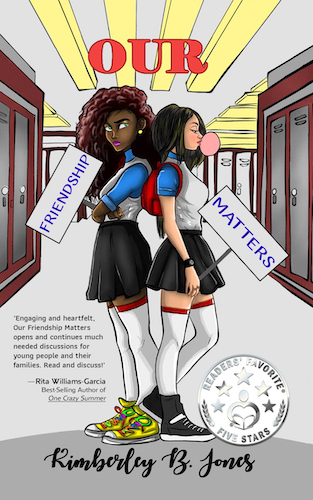 Our Friendship Matters
by Kimberley B. Jones

Leah and Sasha are 17-year-old friends who had been close to one another since elementary school, but as the summer approaches they find their friendship tested in ways they never anticipated.

Following graduation, Sasha’s privileged life and perception of the world around her is suddenly altered when an old childhood friend persuades her to join in a campaign against an injustice after his best friend is killed by a cop.

But joining the protest has unforeseen consequences for Sasha, distancing her from Leah, who becomes jealous of Sasha’s new friends and finds herself on the opposing side, protesting alongside her group of new white friends.

As the tension mounts between the two bitterly opposed factions, a tragedy strikes and threatens to make Sasha and Leah enemies. Can they find a way to resolve their differences, putting them to the side and learn to accept each other’s viewpoints? Or is their long friendship finished for good?

Kimberley is a professional early childhood educator. She was born in the small town of Saint George, South Carolina, on September 12, 1982. Graduated from Woodland High School in 2000, Benedict College in 2004 with B.S., Child & Family Development, and from Ashford University in 2013 with a Masters in Early Childhood Education.

After receiving her education and being a military spouse, she held several jobs as a preschool teacher and a preschool director, but she wanted to her education to use by writing children’s books. She wrote her first book in college for her children’s literature course. She has self-published several children books on Amazon.

Currently, she is branching off into writing fiction YA, NA, and A novels on issues in society. She loves writing and would not change it for nothing in this world She is now published by Rhetoric Askew. Kimberley is the author of Our Friendship Matters.

Kimberley B. Jones will be awarding a signed copy of Our Friendship Matters (US ONLY) to a randomly drawn winner via rafflecopter during the tour.