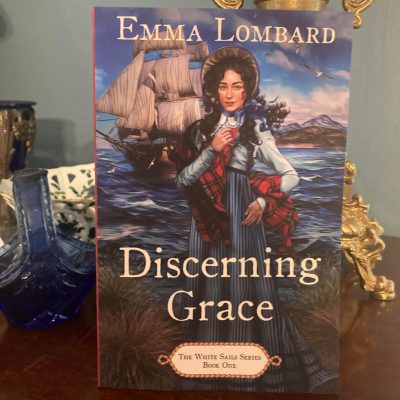 As the first full-length novel in The White Sails Series, DISCERNING GRACE captures the spirit of an independent woman whose feminine lens blows the ordered patriarchal decks of a 19th century tall ship to smithereens.

Wilful Grace Baxter, will not marry old Lord Silverton with his salivary incontinence and dead-mouse stink. Discovering she is a pawn in an arrangement between slobbery Silverton and her calculating father, Grace is devastated when Silverton reveals his true callous nature.

Refusing this fate, Grace resolves to stow away. Heading to the docks, disguised as a lad to ease her escape, she encounters smooth-talking naval recruiter, Gilly, who lures her aboard HMS Discerning with promises of freedom and exploration in South America.

When Grace’s big mouth lands her bare-bottomed over a cannon for insubordination, her identity is exposed. The captain wants her back in London but his orders, to chart the icy archipelago of Tierra del Fuego, forbid it. Lieutenant Seamus Fitzwilliam gallantly offers to take Grace off the fretting captain’s hands by placing her under his protection.

Grace must now win over the crew she betrayed with her secret, while managing her feelings towards her taciturn protector, whose obstinate chivalry stifles her new-found independence. But when Grace disregards Lieutenant Fitzwilliam’s warnings about the dangers of the unexplored archipelago, it costs a friend his life and she realises she is not as free as she believes.

DISCERNING GRACE is historical women’s fiction that will appeal to fans of Claire Fraser from Outlander and Demelza Poldark from Poldark—in other words, fans of feisty historical

Author Bio
Emma Lombard was born in Pontefract in the UK. She grew up in Africa—calling Zimbabwe and South Africa home for a few years—before finally settling in Brisbane Australia, and raising four boys. Before she started writing historical fiction, she was a freelance editor in the corporate world, which was definitely not half as exciting as writing rollicking romantic adventures. Her characters are fearless seafarers, even though in real life Emma gets disastrously sea sick. DISCERNING GRACE, is the first book in The White Sails Series.

You don’t need to be a fan of swashbuckling tales of the high seas to be totally taken in by Discerning Grace. This was a longer book, but I read it quickly and couldn’t put it down. The story of the tragic character, Grace Baxter, is powerfully written. The unloved daughter of wealthy parents, her father makes the decision to marry her off to an old man who is fat and cruel.

After their dinner party, the man who is promised her hand sneaks into her room and violently tries to have his way with her. She escapes and doesn’t know what to do. She runs away and disguises herself as a boy. Looking for a place to be safe and hidden, she is convinced to join other young men on the ship Discerning. The terrifying predicament she finds herself in makes her convinced to keep up the charade in order to remain safe on the boat.

When she is found out, everything changes with her new friendships amongst the crew. Because this is the 1800’s, she is now a female who must be protected. So Grace is now given a private room and not allowed to be on deck, unless she is accompanied by the lieutenant. Lt Fitzwilliam has fallen in love with Grace and she longs to marry him. Many of the sailors believe that a woman on board will bring bad luck. The fiesty Grace does tend to bring drama and crisis everywhere she goes.

Grace finds out that the cruel man she ran from has put out a bounty, wanting to get her back. Even though the Discerning is far away from London, will she be safe from him? You’ll find yourself eager to get the other books in the series, to find more of Grace’s adventures.

I would give the book a PG13 rating because of crude language, voilence, and attempted rapes.