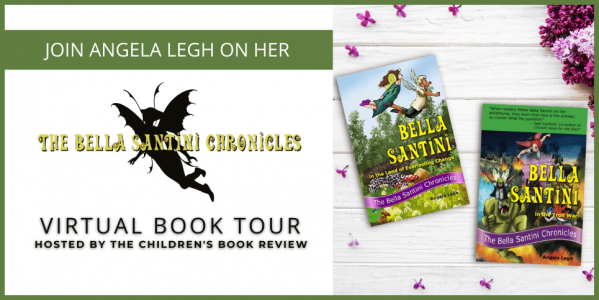 This post is in partnership with The Children’s Book Review and Angela Legh.

Bella Santini in the Land of Everlasting Change

Publisher’s Synopsis: An ordinary teen girl stumbles into a fairy ceremony; is arrested and brought to the fairy kingdom, the Land of Everlasting Change, a land caught in the struggle between good and evil, where Queen Tatiana fights to keep the balance of power from tipping. Queen Tatiana spreads the message of the truth of fairyland, that fairies are emissaries of love. This gripping tale in a magical land crosses time and dimensions, bringing readers on a journey of self-discovery.

This book series seeks to plant seeds of wellness into every child’s hearts and minds who reads or has the books read to them. The seeds planted are unconditional love, inner peace, and emotional self-mastery.

Bella Santini in the Troll War

Publisher’s Synopsis: In The Land of Everlasting Change, Bella Santini is an ordinary girl who was spirited away to the land of the Fae. She completed her admission trials and was initiated into Yelimoon fairy school. Her nemesis Novaq continues his campaign to get her thrown out of the school. Under the cover of darkness, Novaq and friends conspire to kidnap Bella and deliver her to Ginekei, who will banish Bella from the kingdom.

Her friends Shibohna, Matteus, and Torvieto, race to her rescue. Together, they use their collective wisdom to foil the kidnappers. However, the rescue party is unable to return to Yelimoon School. A trek through the night brings them to Thessaeria, where Bella learns the truth about who she is.

Meanwhile, the Trolls, under the direction of Ginekei, lead an attack on Fae cities. The balance between light and dark is at risk in the Fae realm. Who is Bella, and what will become of her?

Bella Santini in the Troll War is book two of the Bella Santini Chronicles series. This book series seeks to plant seeds of wellness into the hearts and minds of every child who reads or has the books read to them. The seeds planted are unconditional love, inner peace, and emotional self-mastery.

Angela Legh grew up in San Francisco, CA. She learned from her father that men were people to fear, and that anger is bad. She learned from her mother how to love unconditionally. For the first 54 years of her life, Angela was bullied, first by her father, then by the man she married. In both stages of her life, a fire caused the family to break up. The first fire, when she was five, resulted in the children being sent away for months while her parents sought housing. The second fire, a disastrous California wildfire, caused Angela to question her choices in life; leave her marriage, and seek to find herself. Angela is now an author and self-development mentor.

Her children’s book series, The Bella Santini Chronicles, has received high praise and is known for helping children learn how to manage their emotions.

A young teen girl is sulking because her parents made her go on a camping trip, when all she really wanted to do was paint. With her art supplies at home, she feels very down and angry. During the night she begins to follow a firefly into the woods, but it’s a trap. She’s caught looking on a fairy circle and they throw her in jail.

Now she’s living in another universe called the Land of Everlasting Change. The high level fairies believe that she is not only part fairy, but part of the royal blood. They must hide this secret and make her go through initiation for magic before she can enter fairy school. The rest of the book describes all her adventures in her initiation.

The book ends with a cliff-hanger and the next book is introduced by a sneak peek at Chapter 1 of Bella Santini in the Troll War. The author uses her philosophies and beliefs that we all have magic inside of us to shape her handling of the bullying in this story. The imaginative writing is perfect for 8-12 year old’s who love a good fantasy book.

Enter for a chance to win a Bella Santini Chronicles book prize pack!

A copy of Bella Santini in the Land of Everlasting Change

A copy of Bella Santini in the Troll Wars

A Bella Santini Chronicles Back Pack

A copy of Bella Santini in the Land of Everlasting Change

A copy of Bella Santini in the Troll Wars