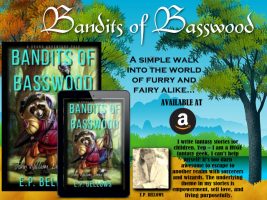 An adventure tale for young readers…

John William Drake was born an explorer; just like many, many Drakes before him. His adventure really began with the discovery of a book hidden in the ceiling, followed by the mysterious disappearance of his father. He lived every day in misery until his twelfth birthday. A new friend gave him an invitation he could not turn down… follow me and change your destiny.

He never imagined being captured by bandits and taken to a ship riddled with river rats was part of his fate. Not just any bandits – the Bandits of Basswood; known to be a ruthless and wild crew of thieves. Trying to escape would be a ridiculous idea. No one has ever escaped and lived to tell about it. Uncovering traces of his missing father gave him hope and upped the stakes. John William was determined to get off the ship alive and search for the missing pieces of the puzzle. The chase out of Basswood was on. He took a chance to change his destiny and ended up on a wild ride to solve the most important mystery of his life.

“The imaginative world created by the author is especially fun. Some animals can talk (with attitude!), magic is in the air and emu-like creatures provide fast transportation. Yes, I realize this series is for children- and they can certainly read it. Just as soon as I’m finished.” – Amazon Reviewer 5 stars

“I enjoyed reading these books. Great for young adults, even though I’m an adult. I would recommend this series to those kids who like a good adventure…” – Amazon Reviewer 5 stars

“A simple walk into the world of furry and fairy alike. Enjoyed the character building, as the young boy finds himself in a world with furry pirates, and a feisty fairy princess. Even the villains (as a group,) were only bad because of the main villain of the piece. all in all a nice intro to a simply enchanted world. Hope to see more…” – Amazon Reviewer 4 stars

Celeste stiffened her posture. “Here is the plan; one of you needs to help me free myself from this tie before the hatch opens again. I will take on my bird form and fly out of here. They won’t even know what happened. Once I tell my dad, the guards will come to save you.” Her tongue hovered over her upper lip as she strained to free her hands.

Ferdinand frowned. “That’s your plan, is it? Marvelous! You are just going to flutter off in the dark of night? You don’t even know how far away from Verhonia you are. Nonsense! You’re not doing it!”

“Why can’t you turn to a bird with your hands tied? Then you could free yourself and unfasten my ties.” John William wiggled around on the bench.

“I could break a wing or something worse. I’m not willing to risk it.” Celeste replied.

“A lot of good having your hands free will do when you are locked in a cabin surrounded by bandits and river rats!” Ferdinand huffed.

The boat jolted suddenly, throwing the three of them off their seats. Celeste’s eyes lit up. She waved her hands around. “I did it!” she shrieked.

The drunken slur of a bandit came from the other side of the hatch. “I don’t want any foolery in there!” The hatch shifted and wiggled.

Within seconds, she was a beautiful red robin flying around the cabin. The hatch swung open and out she flew, nearly hitting the bandit in the face.

The bandit swung his arm. “What the – how did a bird get in here? Hey, you lazy lumps! Catch that bird; let’s boil it for dinner!” He laughed belligerently. The bandit reeked. He must have been saturated from head to toe with rum.

The bandit poked his head in and looked around. “Hey! Where’s the girl?” He stumbled inside, knocking ship tools and other small objects around with his tail.

John William and Ferdinand remained quiet, looking like they both swallowed the same canary. The bandit stood over John William, swaying with his hands on his hips. “Well, where is the princess, wart? Did you help her escape?”

John William cleared his throat. “I, I don’t know what you are talking about.”

“Is that so?” The bandit pulled a knife from his belt with a taunting smile.

“She escaped,” Ferdinand blurted. “We tried to stop her, but she refused to listen. She went out the hatch and jumped overboard.”

“Impossible.” The bandit rubbed his fingers over his oily fur.

“Um, I believe I am Captain Vic’s supper.” The hopper stuck out his pudgy belly.

“It’s true! I heard the splash, myself,” declared John William, trying to take the focus off Ferdinand. The bandit examined their faces.

“Plunk – it sounded just like that,” said Ferdinand with a shaky laugh.

The bandit stormed out of the cabin. “The princess escaped!

Get up, you twits!” He ran around the boat, banging his blade on an iron pot, making as much racket as one drunken bandit possibly could. The other bandits stirred.

Ferdinand shook his head with terror in his eyes. “We’re in for it now, boy….”~

A few random things about me…

Um, let’s see… when I was eight, I had a pet turkey. I used to take it with me on my very short lived paper route. Needless to say, I was terrible at delivering the paper. No one wanted a “Dollar Saver” with turkey poop splattered across the front page. Apparently that’s where the best coupons are.

Books… well, “Treasure Island” is a fantastic pirate tale. I love just about anything by Roald Dahl. I would also like to thank C.S Lewis for sending me on an unrelenting childhood quest for portals to amazing worlds (even in the most unpleasant locations, e.g… the older brother’s closet, etc…)

I write fantasy stories for children. Yep – I am a HUGE fantasy geek. I can’t help myself! It’s too darn awesome to escape to another realm with sorcerers and wizards. The underlying theme in my stories is empowerment, self love, and living purposefully.

When football is on I turn into a different person. I may even use a curse word or two… or three. I enjoy running; which is a good thing because I need to do it in order to fit into my jeans.

I love to cook and really, really love to eat. I have a theory that avocados actually contain super powers and have the amazing ability to make any snack epic. I also love garlic… which, according to my loved ones, also has an unfortunate super power … the pungent breath-inator… or something of that nature.

Few things make me smile more than chocolate, cheese… AND, if the Chargers would make it to the Super Bowl again – just once:)

a Rafflecopter giveaway
Sponsored By: