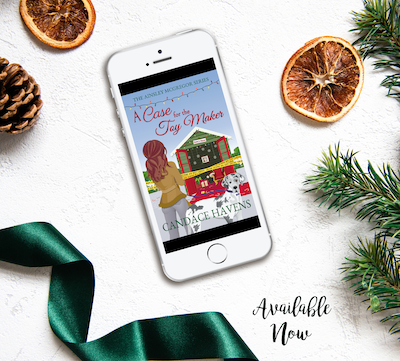 Welcome to this new Book Blitz! You’ll want to read A Case for the Toy Maker. Also, check out the huge giveaway prize below: Kindle eReader & $25 Amazon GC Giveaway!!!! It’s Christmas in Sweet River, Texas, and the whole town is feeling festive apart from Ainsley McGregor. Ainsley has never enjoyed the holidays and would rather ignore them, but with her shop Bless Your Art busier than ever and filled with happy shoppers, even she’s feeling some Christmas spirit. That is, until her Great Dane, George Clooney, sniffs out a dead body in the Santa House at the Christmas Festival.

When one of her favorite crafters becomes the prime suspect, Ainsley is determined to prove his innocence. The case is full of so many twists and turns that even Ainsley begins to fear the truth. Is she protecting a killer?

With help from her friends and some extremely nosey townsfolk, Ainsley and her dog hurry to find the truth––as long as they can outwit and outrun the killer first. Otherwise, this Christmas might just be her last.

“There’s the Santa house,” Shannon said, just as George  growled menacingly. “What’s wrong, George?” That growl was never a good sign, and the hairs on the  back of my neck stood up.

I had a strong urge to turn around and walk back to the  store. But my curiosity knew no bounds. I had to find out  what was going on.

We stopped in front of Santa’s house, which was a bigger  version of our booth except it really did look like a house  right out of the North Pole. “Wow, they did a great job. It’s  fancy,” I said.

Shannon glanced at him and then me. “Ainsley? You  don’t think…is something wrong?”

“I hope not,” I said. George had done this before and it  had never been good news.

He barked and then did the high-pitched whine that told  me something I really didn’t want to know.

I took a deep breath and pulled my phone out of my  pocket. “Hold on to George—tight.” After handing her the  leash, I turned on the flashlight app on my phone.

“You’re freaking me out,” she said, as she gripped the  leash tightly.

“I’m freaking myself out.” Opening the double doors to  Santa’s house, I peeked inside.

My breath caught, and bile rose in my throat.

“Call my brother.” My voice was nothing more than a hoarse whisper. I forgot I had my phone in my hand. “What is it?”

The image of the man with the candy-cane-striped pole  sticking out of his chest would be burned in my brain  forever. Bestselling author Candace Havens has written more than 35 novels. She has won the Holt Medallion and her books have received nominations for the RITA’s and Write Touch Reader Awards. She is the author of the biography Joss Whedon: The Genius Behind Buffy and a contributor to several anthologies. She is also one of the nation’s leading entertainment journalists and has interviewed countless celebrities including Tom Hanks, Nicolas Cage, Tom Cruise, George Clooney and many more. Candace also runs a free online writing workshop for more than 2000 writers and teaches comprehensive writing classes. She does film reviews for Hawkeye in the morning on 96.3 KSCS, and is a former President of the Television Critics Association.